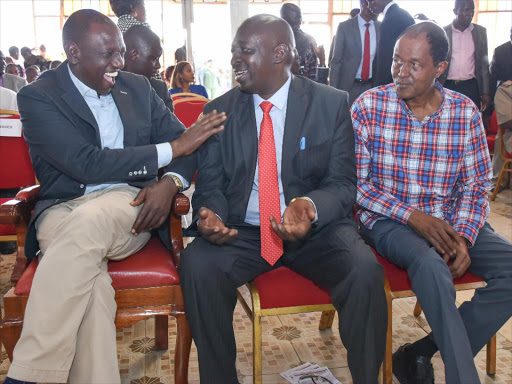 Three Rift Valley MPs have triggered a political storm after publicly claiming Deputy President William Ruto has a 500,000-acre farm in the Republic of Congo.

In a scathing attack on the DP, the rebel Jubilee lawmakers claimed Ruto was positioning himself to be the principal maize supplier to the scandal-ridden National Cereals and Produce Board by discouraging the region from maize farming.

"You can’t be telling us to plant avocados, plant macadamia but you are not telling us what happened to maize…Now you have gone even to Congo. You are growing 500,000 acres of maize," said Keter without producing any evidence to back his claims.

In an interview with the Star yesterday, Kutuny asked the Ministry of Foreign Affairs to come clean on the deals he claimed Ruto had signed with the Denis Nguesso

The DP travelled to Brazzaville in September this year with a large delegation and held talks with the country’s top leaders.

A statement posted on his official website said Ruto was in Congo Brazaville for an official visit and was received at the Maya International Airport by Prime Minister Clement Mouamba.

The tour, the statement said, was aimed at promoting cooperation between the two countries in various fields of interest.

The two countries agreed to cooperate in political consultations, economics, trade and investment, agriculture, science and technology, culture and arts.

Yesterday Kutuny said it was during this tour that Ruto sealed his maize deal.

"Part of his mission to Congo recently was to sign the deal to start maize farming there. He wants local farmers to do avocado to occasion a maize shortage in the country so that his maize from Brazzaville can gets its way to the local market," he stated.

But reached for comment, the DP’s communication director David Mugonyi said curtly: "I will not respond to nonsense."

Rift Valley is the country’s breadbasket but poor pricing and infiltration by cartels threaten the region’s economic mainstay, leaving many farmers languishing in poverty.

The legislators asked the Director of Public Prosecutions Noordin Haji to crack the whip on the country’s second in command and influential officers at Harambee House Annex.

"Farmers, you must know this: most of our problems involving maize and fertilizer have been brought about the Deputy President and his office. We want his office investigated," Keter said.

The Kenyan law does not insulate the Deputy President from any criminal or civil prosecution while still in office as it does for a sitting President.

There is also no law that bars anyone from farming outside the country and importing the produce to Kenya.

This means that the DPP can sanction prosecution of the DP for any offence should there be cogent evidence.

"We want the DPP to investigate him [Ruto] over maize. Every time the government releases money to NCPB to pay farmers, he calls all managers and instructs them who to pay and who not to pay," Keter said.

fraud in the payment of traders instead of genuine farmers.

Agriculture CS Mwangi Kiunjuri has been under fire from President Uhuru Kenyatta to address the maize mess or ship out.

For the first time, the Jubilee MPs from the maize growing rift valley said Ruto stood no chance to succeed Uhuru and scoffed at his early 2022 campaigns.

Ruto is banking on his populous Rift Valley backyard to propel him to State House but frequent criticism from within his own bastion, coupled with a parallel presidential bid by Kanu’s Gideon Moi, could threaten his grip.

"We don’t want the 2022 talk. In fact, he has already lost. There is no direction. You are going nowhere," Keter said of the DP’s bid.

He urged President Kenyatta to continue the lifestyle audit and questioned Ruto’s sources of immense wealth that he dishes in fundraisers.

"Lifestyle audit should continue. They should not come here to fundraise for us. Farmers here don’t want fundraisers. They want good pricing for their maize, better pricing for tea and milk and hospitals and roads built," Keter said.

was forced to suspend the Sh2,300 for a 90kg bag of maize for further consultation following protests from farmers.

Keter and his team want farmers paid at least Sh3,600 for every bag of maize and dismissed

claims by the government that there was a bumper harvest last year.

Uhuru has on various occasions fired a warning salvo at Kiunjuri over irregular payments made to maize cartels through NCPB.

Uhuru swore before God to punish ministry officials if they failed to pay maize farmers who had supplied maize NCPB.

"I promise you and I swear before God, try that again and you’ll see what will happen to you. Sisi hatutaki mchezo tena (We won’t entertain this again)," he stated during the Nairobi International Trade Fair on September 4.