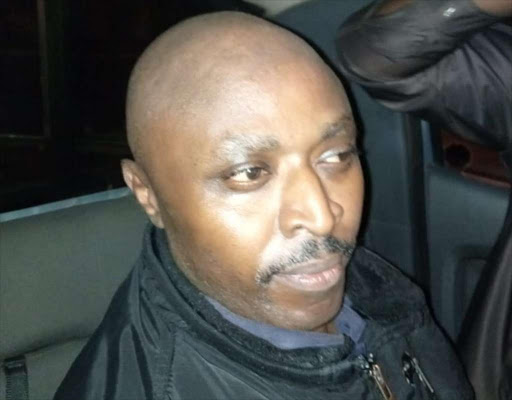 He was nabbed in Gachie, Kiambu, and taken to Pangani police station on Tuesday night.

in Kayole under the name Millan Health Care.

Two of his employees have been remanded for operating without valid licenses. On Thursday last week, they were charged with operating a pharmacy and laboratory without a license.

charged with operating a lab without a license from Kenya Medical Laboratory Technicians and Technologists Board. They denied the charge.

The two were arrested after Flying Squad's head of operations John Njoroge and his team stormed the clinic with Kenya Medical Practitioners and Dentists Board CEO Daniel Yumbya.

Police have been hunting for Mugo for seven days.

Detectives from the Flying Squad visited his home five times

but failed to arrest him.

The latest ambush was on Monday night at the Mutu-ini village in Dagorretti, but Mugo escaped the police dragnet.

Yesterday evening, Flying Squad boss Musa Yego told the Star, “We are closing in on him. We are confident that before the end of the week, he will be with us.”

Yego said police had spread their search to other parts of Kiambu.

On Monday, police received information that a man resembling Mugo had been spotted in Ruaka dressed in women’s clothes. A search did not yield results.

Flying Squad officers and officials from the Kenya Medical Practitioners and Dentist Board raided a clinic in Kayole where Mugo and others were alleged to be practising without proper documentation.

There was also a public outcry after NTV exposed Mugo at his new clinic where he is said to be engaging in unethical conduct.

In 2015, he was arrested and charged with various offences linked to operating an illegal clinic in Githurai 44, Nairobi and raping a woman he had allegedly sedated

at Prestige Healthcare Clinic on November 1,

The prosecution accused Mugo of operating a pharmacy not registered with the Pharmacy and Poisons Board.

He was charged and released on a Sh1 million cash bail or a Sh5 million bond with a surety of a similar amount.

Post a comment
WATCH: The latest videos from the Star
by By Lillian Mutavi @LillianMutavi
News
13 November 2018 - 18:00
Read The E-Paper