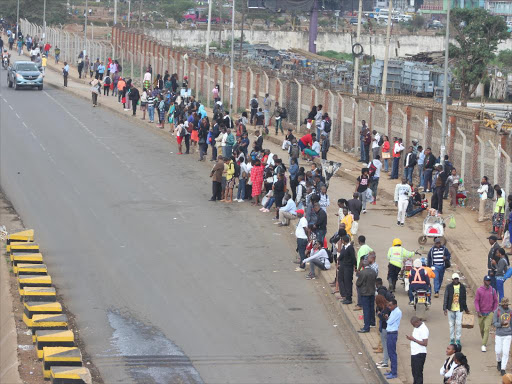 Commuters stranded at Roysambu, Nairobi after matatus withdrew their services from the roads on Monday, November 12, 2018. /EZEKIEL AMING'A

Interior CS Fred Matiang'i has told Kenyans to be prepared, 'even if they will have to walk to work' until the government is satisfied matatus have complied with the law.

Addressing journalists on Monday, the Cabinet Secretary said the crackdown will become a daily experience.

"Kenyans let's come to terms with this. We are not doing this campaign for a month it is now going to be our way of life," he said.

He said matatu operators will not blackmail the authorities to abandon the crackdown. This was after most of them withdrew their services on roads across the country.

The few that were left on the road hiked their fares to almost triple the normal price.

"They can keep them at home as long as they want because we are not changing our position," Matiang'i said.

"You are not licensed to blackmail people...you cannot continue with such a business...It is time to re-look those licenses," Matiang'i added.

He said operators who have increased their fares will lose their licenses.

"We expected them to do this today. They will lose their licenses today. I can assure you," he said.

He said for those asking for more time to comply, they will have to deal with the consequences.

His sentiments were echoed by Transport CS James Macharia who said the government will review licenses for matatu operators who have withdrawn their services.

The CS said the government will carefully monitor and determine which vehicles and saccos were not on the road because they were 'forfeiting' their licenses.

"By them not being on the road they are giving a message that they do not require licenses. If you were given a license and you are not using it, you might as well withdraw it," he said.

He said the ministry had given adequate time to the operators but many have not complied with the detailed rules and regulations.

Inspector General Joseph Boinnet said close to 2,000 offenders have been arrested in the crackdown.

However, MOA Coast coordinator Saalim Mbarak cried foul that the operators had complied but Matiang'i was still after them.

"We did not strike because of 'Michuki Rules', these punitive directives by Matiang'i and NTSA are the cause," Mbarak said.

He said PSVs have complied with 'Michuki Rules' but are off the road fearing harassment from traffic cops.

"Matiang'i last week said operators are criminals. He already has an informed mind and what awaits is prosecution," Mbarak protested on Monday in Mombasa.