How Weston Hotel land was grabbed from KCAA 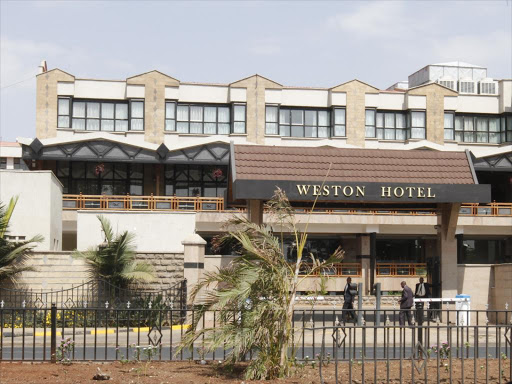 KCAA’s manager for legal services Cyril Wayong’o yesterday told the National Land Commission that a scheme was hatched to grab the parcel in 1999. Neither the Directorate of Civil Aviation (later transformed into the KCAA) nor the Transport ministry sought ownership papers.

And because the KCAA did not have papers, the land grabbers had their way.

On June 29, 1999, then Commissioner of Lands Sammy Mwaita wrote to the Directorate of Civil Aviation indicating he had received an application from a church group that wanted to build a church on the site.

The Directorate of Civil Aviation on July 8,1999, objected and told Mwaita it had plans for the land so it could not be allocated to third parties.

"This property had been set aside by the Directorate of Civil Aviation for the construction of its headquarters," Wayong’o said.

Wayong’o, who also doubles up as corporation secretary, said neither the board nor the KCAA had discussed the purported allocation.

Undeterred, on July 19, 2001, the Commissioner of Land wrote to the Transport PS indicating receipt of an application, this time from Kikabi Homes Limited, which wanted to be allocated the land. Then PS Francis Muthaura, in a letter dated August 22, 2001, stood his ground and told Mwaita the land belonged to the KCAA and was not for allocation to anybody or company.

Muthaura’s letter was addressed to his colleague in the Land and Settlements ministry.

Attempts to grab the land, according to Wayong’o, would become more aggressive when assets belonging to the Directorate of Civil Aviation were being vested in the new KCAA.

The KCAA had been established on October 24, 2002, through the Civil Aviation Act, 2002, thereby taking over all the assets previously held by the DCA through a vesting order of October 13, 2006.

"The transition between the DCA and the KCAA was not done well," Wayong’o said.

However, in 2002, Commissioner of Lands Mwaita instructed the Directorate of Civil Aviation to move its stores from the land. No reason was given and KCAA never surrendered its title, Wayong’o told the commission during a session presided over by acting NLC chairperson Abigael Mukolwe at ACK Bishop Annex offices.

"The relocation was to create room for the allotee," Wayong’o said, adding he has never come across minutes of any KCAA board meeting that approved the transfer or surrender.

As a result, the KCAA has been forced to build its headquarters on land leased from the Kenya Airports Authority.

KCAA established in September 5, 2002, that the parcel had been allocated to two companies — Priority Limited and Monene Investment Limited.

It has, however, failed to obtain crucial documents such as the PDP, the survey plan and deed plan used for the issuance of the title deed.

Lawyer Ahmednasir Abdullahi, representing Ruto, told the commission that the DCA had been given alternative land but could not pinpoint the location of the two alternative parcels or their reference numbers.

"The totality of evidence they have shows they have no case. They’ve been negligent," he said.

However, Wayong’o, who joined the KCAA in May 2009, said they discovered the alternative land belonged to the Kenya Meteorological Department.

He said that after the commissioner of land had written demanding that the DCA move, a member of staff identified as AN Gatta was tasked with a special assignment of coordinating the transfer in October 2002.

Kyungu would on January 6, 2003, write to the Lands PS noting that the property had been fenced off by private developer. He requested for the issuance of a title deed to KCAA and revocation of the wrongful allotment.

Separately, the KCAA wrote to the Transport PS on January 6, 2003, objecting to the possible allotment of the property, maintaining that it was crucial to its logistical support for air safety and navigation.

The mysterious private developer temporarily stopped work on the site immediately the KCAA informed the Transport ministry but later resumed its operations.

Responding to a letter dated June 10, 2003, protesting at the occupation, the Transport ministry advised KCAA to follow up with the Ministry of Land and the defunct Nairobi City Council to stop construction works.

Nothing could stop the covetous private developers from the protracted and brazen push to grab the plot. KCAA’s efforts to secure the land would be frustrated by a well choreographed scheme coordinated by government officials at the Ministry of Lands.

By a letter dated September 29, 2004, Wayong’o told the commission, KCAA “informed the Ministry of Transport and Communication that all KCAA assets were yet to be transferred and that the ministry should pursue the issue of revocation of irregular allocation”.

The KCAA also sought help from the police on August 4,2005 without success, according to Wayong’o.

"Strangely, the commissioner in his response informed the KCAA to obtain a court order that will order the provincial security intelligence committee or the police to evict any squatters who had unlawfully settled on the said parcel of land. It was ridiculous," Wayong’o told the commission.

All efforts to protect its assets from the grabbers having failed, on October 23, 2008, the KCAA reported the matter to the then Kenya Anti-Corruption Commission to file suit for recovery.

But that, too, yielded no fruits as the KCAA did not have crucial documents, which had conveniently gone missing.

Yesterday, the during the hearing, Ahmednassir was tasked to explain why Ruto deserved to get the parcel more than the DCA.

"My client is not from Mars," Abdullahi said. "He is a Kenyan who bought the property properly following processes."

Weston Hotel was valued at Sh300 million in May this year according to a valuation report by Zenith Management Valuers Ltd. The hotel had been charged to a bank for Sh1.2 billion loan.

Another charge of Sh700 million on July 8, 2015, took the total charge at Kenya Commercial Bank to Sh1.2 billion. KCB lawyer Martin Muge said any move by the NLC will have ramifications on the interest of the bank.

But Wayong’o challenged Muge to go an extra mile when conducting due diligence.

He said since he took over as corporation secretary, the KCAA had revoked five titles out of 15 in Mombasa alone.

Mukolwe said the commission will examine the documents and evidence before deciding.

"We’ve heard everyone. We will analyse information provided as a commission before making a determination," she said.

Post a comment
WATCH: The latest videos from the Star
by GILBERT KOECH @KoechJunior_1
News
01 November 2018 - 06:00
Read The E-Paper