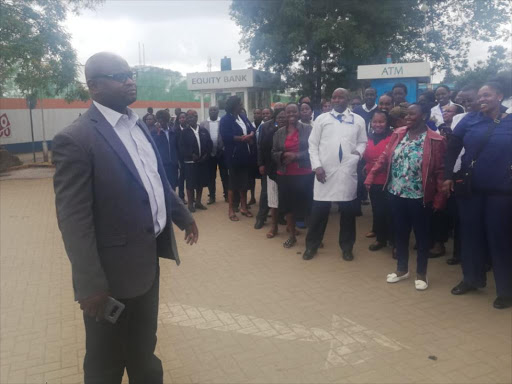 Nurses union leader Seth Panyako was on Monday arrested for inciting nurses at Kenyatta National Hospital to participate in a protest.

The Kenya National Nurses Union (KNUN) secretary general was taken by police following a report by the KNH security chief.

Several protesting nurses were also arrested and held in custody at the KNH police post.

said they called the police since "Panyako has no permit to incite nurses to strike."

"He is an outsider, hence, cannot come here to cause disruption at the hospital when nurses are at work,"

The nurses at the referral hospital said the go-slow followed the "management's infringement of their right to join a union."

The health workers further raised security concerns citing an assault on a nurse on October 14.

"Our colleague was hurt but the management has not taken any action or given any information regarding the patient who assaulted the nurse," one of them said.

They claimed the assaulted nurse has been asked to pay for her treatment "she was attacked in the line of duty."