I didn't say referendum a must, let Kenyans decide - Raila 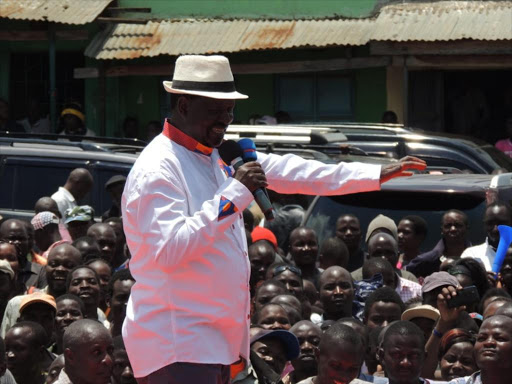 ODM leader Raila Odinga has trashed reports in various media outlets quoting him as insisting on a referendum to change the structure of government.

During a campaign rally for Migori Senator candidate Ochillo Ayacko on Friday, the former Prime Minister said he only talked of supporting the idea should Kenyans choose that path.

"I did not say that referendum is a must. I said if Kenyans want it, I support," he told ODM backers in Suna West.

"This must be a result of consultations between the Building Bridges team and the people of Kenya."

Earlier on a referendum by virtue of his handshake with President Uhuru Kenyatta.

But the ODM leader differed with those attacking him over the issue saying he only expressed his opinion.

He cited concerns among Kenyans on the erratic components of the 2010 Constitution.

Even so, there is a growing national conversation with suggestions for a change in government structure to cut the burgeoning wage bill.

Gatundu South MP Moses Kuria and political analyst are among the voices that have backed the call.

The lawmaker said he will only support efforts to change the Constitution if the idea is to ease the burden on Kenyans.

Kuria said he agrees with Raila's calls but "these changes are about reducing the burden for Wanjiku."

"It's about reducing elective and nominated positions not adding positions," he said.

"It's not about adding the position of a Prime Minister or creating a parliamentary system. I hope you get this clearly."

For his part, Ngunyi said "Raila is dead right."

"We ate a half-baked constitution. Now we are politically constipated. We must change "Katiba Mbichi". What do you think?" he tweeted.

Opponents, however, expressed fears that the vote will lead to a bloated government, hence unlikely to change the huge wage bill equation.