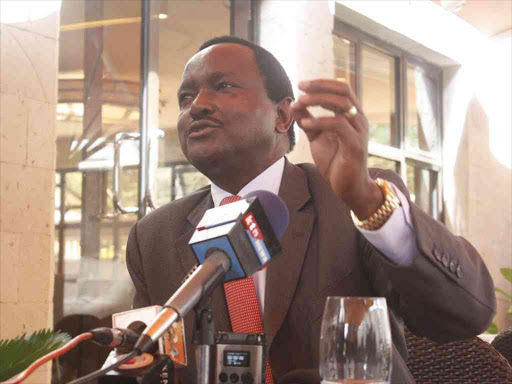 Wiper leader Kalonzo Musyoka has said it is within the law to exploit loopholes in the system and pay less taxes. /FILE

The former Vice President said tax avoidance is perfectly lawful, but evasion is not.

"I'm a lawyer by profession and I know tax avoidance is within the law while tax evasion is not allowed," Kalonzo said.

He was addressing entrepreneurs during the launch of Andersen Tax Company.

Andersen Tax is one of the top US firms that advise on tax compliance.

Tax avoidance is the arrangement of one's financial affairs to minimise tax liability within the law while tax evasion is the illegal non-payment or underpayment of tax.

"Kenya is economically sick, we hope this doesn't continue this way. When you collect taxes, Kenyans don't want to hear it has been stolen because then you complicate the sickness," Kalonzo said.

On September 20, Parliament adopted President Uhuru Kenyatta’s controversial memo that gives the executive powers to raise up to Sh130 billion through taxes including the eight per cent levy on fuel products.