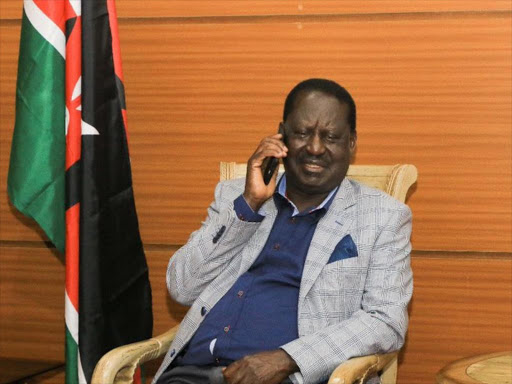 Opposition leader Raila Odinga has thanked MPs who supported and enabled the passing the Finance Bill 2018 saying it was part of the Building Bridges initiative.

ODM said in a tweet on Saturday that the party leader has hailed the move to approve the fuel tax as one that was in good faith.

However, the party's supporters castigated Raila's support for the Bill saying he has failed to read the country's mood on the new set of taxes.

@snyamora said: "Was it passed really? Building bridges when Kenyans are suffering from high cost of living?"

"Demolishing bridges and building walls between the rich and the poor would aptly describe what happened in the chaotic acrimonious session in parliament."

"Taxing Kenyans is part of building bridges?This one has really worked because the Country is now United more than ever in protest of the new tax rates," said @ThePrinceTed.

Another Twitter user said Raila was being hypocritical by supporting a sham vote on the tax yet "he has been complaining of vote rigging."

Paul Njeule asked: "So, taxing the poor to death to recover what was stolen by those in power is building bridges?"

@WuodAnthony said: "I missed the old and charismatic RAO, the current one is feasting. On a high table with masters of impunity."

Raila had, during a Parliamentary Group meeting, rallied MPs from his party to support the Bill. The party agreed to a conditional support to the legislation.

Among the issues ODM asked the government to commit to was the fight on corruption, reduction of wastage, tamed appetite for borrowing, and brakes on ambitious infrastructural projects.

Mohamed said the opposition would support the tax measures for only a year.

Tempers flared in the House on Thursday amid accusations of betrayal as Speaker Justin Muturi rammed through President Uhuru Kenyatta's memorandum on the Bill.

For hours, MPs from both sides of the House chanted "Duale must go! Muturi must go!".