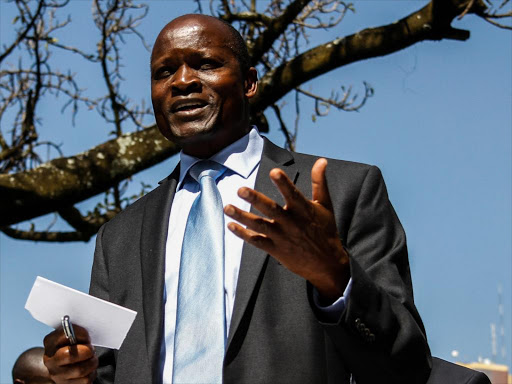 Migori governor Okoth Obado with family members during a pressconference in Nairobi on September 12. /ENOS TECHE

Migori governor Okoth Obado is on the spot for the third week running after it emerged yesterday that detectives are pursuing what is believed to be suspicious transfers of county funds to his children abroad.

The Star has also established that asset recovery agencies have frozen the bank accounts of Obado's wife, Hellen Adhiambo Odie, five businessmen and three companies believed to be proxies or associated with the county boss.

In documents filed in court, EACC says major Migori county suppliers who are alleged to be Obado's proxies made huge international transfers to, among others, Obado's children in Australia, Hong Kong and China.

The proxies known to each other registered many companies that have been awarded what EACC terms as “inflated and fictitious contracts”.

Over Sh2.5 billion has been paid out to the dubious companies over the last five years.

“The preliminary investigations have raised reasonable suspicion that the embezzled public funds have been used by the governor, his wife and the said close proxies, the respondents herein, to accumulate property and illicit wealth,” EACC said.

Those named as the governor’s associates who have benefited from the alleged fraudulent deals and whose accounts have been frozen include Jared Peter Odoyo Oluoch Kwaga, Ernest Omondi Owino and Joram Opala Otieno.

In the 2015-2016 financial year, for instance, the companies owned by the suspects were awarded tenders worth Sh239.7 million.

The probe is another nightmare that Obado and family have been grappling with besides the gruesome murder of Rongo University student Sharon Otieno.

Obado and his wife are among persons of interest that detectives are investigating in connection with the murder of the governor's lover, Sharon.

The EACC is now considering seeking mutual legal assistance from the three countries to recover the cash according to court documents.

In the applications seeking to extend the freeze, the anti-corruption agency says it may apply for mutual legal assistance as provided under chapter 75a of the Laws of Kenya following discoveries of international money transfers to his children and others in Australia, Hong Kong and China.

Part of the cash paid to Kwaga was wired to the accounts of Scarlet Susan Okoth and Acholla Okoth.

“It is confirmed that Scarlet Susan is daughter of Zachariah Okoth Obado, the Migori county governor,” EACC stated.

It has emerged that EACC discretely got a six-months freeze of six banks accounts and preservation of a massive 37 parcels of land on December 1, 2017.

Most parcels of land are situated in Migori town.

But the preservation order was again extended on June 21, 2018, for a further four months.

EACC raided the home of suspects and retrieved sale agreements and title deeds of additional 40 parcels of land, bringing to 77 pieces of land whose acquisition is questionable.

Judge Ong'udi described the immoveable properties under investigation as “quite enormous”.

EACC is now demanding an explanation on the sources of the monies in the bank accounts and the land parcels.

“The EACC intends to file a suit for recovery of assets under section 55 of the Anti-Corruption and Economic Crimes Act after the investigations,” Judge Ong'udi said in granting the extension.

An affidavit by EACC investigator Pius Maithya described how Kwaga transferred huge sums of money from his Co-operative Bank accounts to several accounts in China and Hong Kong on August 21, 2014, October 23, 2015, November 18, 2015 and August 23, 2016.

Kwaga is among Migori suppliers whose properties were preserved pending completion of investigations.

Also frozen are the accounts of Hellen Obado at Equity Bank, Awendo branch, which has Sh784,451 and an account identified as Kuku Ni Pesa, Equity Bank, Migori Branch with Sh700,660.

Owino is a director of two firms under probe, Janto Construction and Mbigu Enterprises.

When EACC searched his accounts in August last year, Owino had a cool Sh5.3 million in the bank.

Detectives have also established that the contractors are surrogates and share cash paid by the Migori county government.

“There was a trend whereby, in each of these companies, upon receipt of funds from Migori county transferred monies to Jared Peter Odoyo Oluoch Kwaga who in-turn transferred to Earnest Omondi Owino and also Joram Opala,” EACC told the High Court.

Mbingo Enterprises Ltd has been paid more than Sh700 million for several contracts.

EACC says Mbingo Enterprises constructed Obado's palatial home in Uriri constituency but could not find records indicating that the governor paid the contractor.

EACC says part of the reason they are yet to nail any suspects is because the Migori government initially refused to avail critical documents then the county offices mysteriously caught fire.

The agency says the incident is suspicious and could have been a tactical move to wipe out evidence.

“When he [Migori county secretary] finally complied, it was just a few documents that were availed on 25 September 2017. Come 26 September 2017 the Migori county offices which stored various documents including what was being sought were razed down by a fire. It cannot be denied that this had a negative impact on the investigations,” Justice Ongudi said.

Despite the ongoing probe, Mbigo again got two lucrative contracts worth Sh16.8 million as recently as April this year. After completion of work, county officials wired the money to the firm’s frozen account.

The money becomes part of the millions that the troubled firm cannot access.

The firm, through its director Ernest Omondi, is now seeking High Court orders to be allowed to access the latest deposit.

Post a comment
WATCH: The latest videos from the Star
by FELIX OLICK AND SUSAN MUHINDI
News
22 September 2018 - 06:00
Read The E-Paper