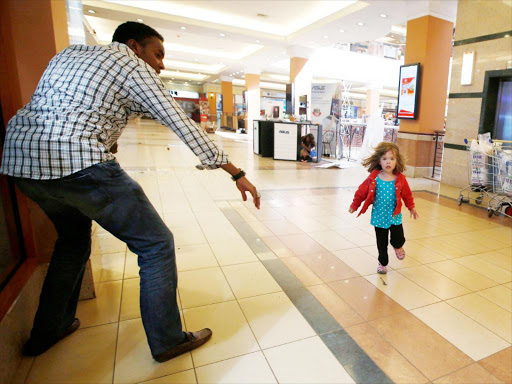 A child is rescued by Abdul Hajji after a gunmen attacked Westgate mall on September 21, 2013. /FILE

government should invest more in modern technology if it is to defeat al Shabaab.

In an interview with The Star on the fifth anniversary

of the deadly attack, Hussein

Abdallah - a former KDF officer, said terrorists depend on technology to launch attacks.

Abdallah made headlines when he put his life on the line to rescue victims besieged by terrorists at the mall for several hours during the September 21, 2013, attack.

He was captured alongside Constable Benjamin Chemjor. This was the officer rescued a two-year-old boy as a terrified woman followed him from the mall in Nairobi.

"Attacks are planned for some time. If our government can device ways to detect such activities in good time then the country will be safe. This can only happen by investing more in technology and surveillance," he said.

Abdallah said when he heard about the attack, he went to Westgate knowing that a terrorist is not a person to negotiate with.

"The attack is still fresh in my mind as if it happened yesterday. I went to the scene with my mind made up to rescue as many people as people," Abdalla said.

The ex-KDF officer said Kenyans, especially pupils and students in various schools, need to be educated on how to be secure during such attacks.

"Terrorists are targetting learning institutions. This should not be ignored. Let children be taught about terrorism," he said.

A survivor of the attack Andrew Lucheli said he is fortunate to be alive.

"I thank God that I'm alive today. The ordeal that I went through was too horrifying to imagine. There was a bullet lodged in my body. Kenyans should unite to defeat the enemy the same way they did during the attack," he said.

Lucheli said he lost a friend and colleague, Ruhila Adatia.

Westgate mall was re-opened in October 2015 amid financial challenges. The business owner vowed to continue fighting for compensation from insurers.

Sony Holdings Ltd said it faced a major challenge in the reconstruction of the phase one which cost Sh1.7 billion after insurers

More than 145 witnesses testified in the trial against four men accused of conspiracy to commit terrorist acts.