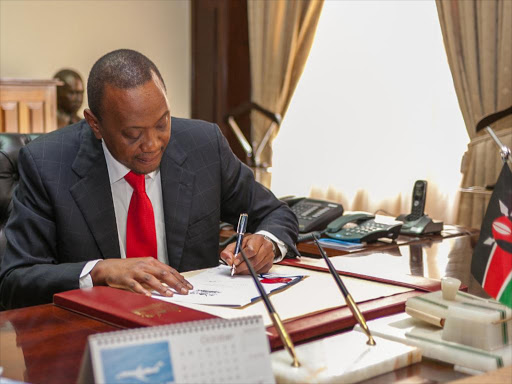 Over borrowing of commercial loans and serious crackdown on corruption are among conditions NASA set for President Uhuru Kenyatta to support cuts on fuel VAT.

The Raila Odinga led coalition held a parliamentary group meeting and resolved it will support the proposed 8 per cent VAT on grounds Uhuru will meet all of its seven demands.

The coalition want all public expenditure to be economical further urging the government to be sensitive about the harsh financial times faced by majority of Kenyans.

"We don’t want to hear of people traveling First Class on public funds because of 'medical conditions'," Minority whip Junet Mohamed said in a statement.

In its efforts to cut costs and save taxpayers money for development, the coalition said the government must make a genuine attempt at eliminating waste in State departments.

NASA lamented of "too many unnecessary purchases that are wasteful, or duplicative and often simply egoistic."

"We want to see the government live within its means. The government has to do what Kenyan families across the country are doing which is to cut what we can’t afford."

Junet, flanked by Minority leader John Mbadi and a troop of opposition MPs, added that the government must also show a serious commitment on completion of parastatal reforms.

On this, the coalition proposed that the unnecessary state agencies be done away with and those with shared functions merged.

NASA has given the government one year within which it has to implement the proposed reforms for it to continue charging the fuel tax.

"The government must tame its appetite for big borrowing. We are borrowing far too much at very oppressive terms. We must freeze any further borrowing," the MPs said.

They urged that the government takes stock of where the country is, how sustainable the current borrowing is, and the need to resume the same on a more sustainable premise.

Junet added: "The government must also tame its ambition of infrastructural projects. There are too many projects being launched left, right and centre."

"We need to have less on these projects and come up with more social welfare projects that affect the people more directly in their lives."

President Uhuru Kenyatta proposed the VAT cuts last week having rejected the Finance Bill, 2018, which sought to shelve the implementation of the 16 per cent.

Instead, the president sent the Bill back to the National Assembly with proposals including reducing the levy from the earlier set rate of 16 to 8 per cent.

He further directed the government departments to initiate austerity measures that would see spending cuts on hospitality and foreign trips to plug the deficit in the 2018/19 budget.

The proposals to be tabled in the National Assembly on Thursday will be the Treasury’s first supplementary budget of this financial year.

Treasury had hoped to raise up to Sh35 billion through the implementation of the 16 per cent VAT on petroleum products, which MPs rejected.

The President’s new proposal of 8 per cent is projected would raise only Sh17.5 billion, hence the other additional measures.

The opposition camp also said they need the government to unveil a clear plan that will lead to new jobs for the unemployed and cut taxes for small businesses.

"As a coalition, we will support such a plan when brought to Parliament," NASA said adding that reforms in the banking sector would also suffice.

NASA has also asked the government to put more effort in the anti-corruption drive "with a clear program for ridding the country of the menace and a clear end game."

They further recommended the creation of special Anti-Corruption Courts to deal with graft cases "with the same vigor manifested by the DPP and DCI".

The National Super Alliance is also pushing the State to come up with a definite programme to recover stolen funds, which run into billions of shillings.

The leaders cited Switzerland and the United Kingdom, who have offered to repatriate corruption proceeds in their country, as some of the areas the state should focus on.

"We are strongly opposed to the current situation where Kenyans have to go back to their pockets to meet our development needs while the lords of corruption continue to enjoy its proceeds without breaking any sweat."

KRA and KEBS saying they have shown no capacity to be imaginative on how to widen the tax bracket, how to net tax defaulters and how to stop dumping of goods into the economy.

"It is time to carry out a radical surgery at KRA and KEBS. It is also time to engage Kenyans into a conversation about reform of the tax system," Junet said.