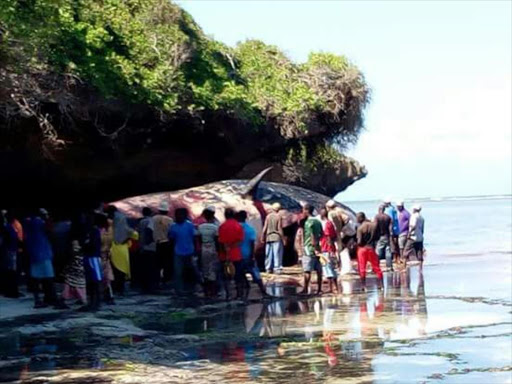 Residents mill around the dead 40-tonne sperm whale on the shores of the Indian Ocean, Kaya Waa beach, Kwale county on Sunday. /COURTESY

Researchers are investigating the death of a rare male sperm whale found on the shores of the Indian Ocean near Kaya Waa beach, Kwale county on Saturday.

The 16-meter 40 tonne whale was found by fishermen who are part of a science network called 'Kenya Marine Mammal Network".

Michael Mwang'ombe who works as Marine Mammal Project Coordinator at the Watamu Marine Association said the whale might have spent a week in the waters before being washed offshore.

The remains of the fish only found in deep seas are still at the shores after residents cut off huge chunks of the mammal for food.

Its size and resting position on the beach has made it difficult to carry it away.

Mwang'ombe said the whale is at stage 3 of its death which is characterized by decomposition and later disintegration of its organs.

The biologist, flanked by other Kenya Service officials, visited the scene on Sunday and collected three teeth, a blubber and skin tissues for further studies to ascertain the cause of death.

Sperm whales migrate from the Antarctic to the Kenyan Coast.

The most common whales along the Kenyan waters are humpback whales which migrate from Antarctic to the Kenyan coast in the months of July, August and September.

The migration is in search of food and to find a safer place away from predators to nurse their offspring.

In 2016, two large sperm whales were found dead in Kenya and Tanzania along the shores of the Indian Ocean.

Post a comment
WATCH: The latest videos from the Star
by ANDREW KASUKU
News
16 September 2018 - 18:00
Read The E-Paper