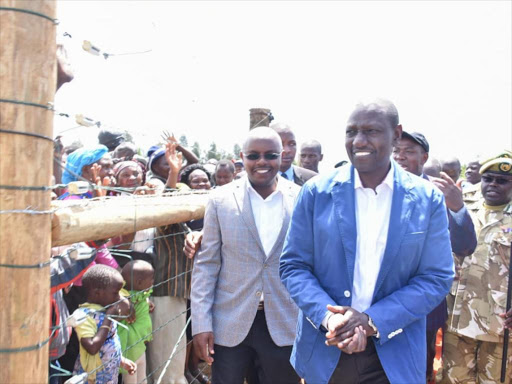 Deputy President William Ruto with Laikipia governor Ndiritu Muriithi during the launch of the 53-km electric fence in Laikipia on Monday, September 10, 2018. /DPPS

Deputy President William Ruto has launched a Sh200 million electric fence in Laikipia county as part of the government’s efforts in addressing the perennial human-wildlife conflicts in the region.

He said the 50-kilometre Rumuruti-Marmanet Forest fence would deter the conflicts that had resulted in huge losses.

Speaking at Gatundia secondary school after the launch of the fence on Monday, Ruto said the project would be completed in the next six months.

It was one of the pledged by the Jubilee Party ahead of the 2017 general election. Already, 14-kilometres of the project has been completed.

"We are implementing part of the election pledges we made to the people of Laikipia during the election. The citizens here have been disturbed for long, some lives have been lost while crops have been destroyed," the DP said.

He went on: "The commencement of this fence means a lot to the people as their lives will be protected and their crops protected from destruction by wildlife."

At the same time, Ruto said the government was finalising the compensation to families which had lost lives, or those who had been injured as a result of human-wildlife conflicts in the country.

The leaders lauded the government for moving swiftly to provide lasting solution to the human-wildlife conflicts.

"We are grateful to the national government for this great project to the people of Laikipia. This will protect them against attacks from elephants that have terrorised them and their crops for a long time," said Governor Mureithi.

The Deputy President also asked chiefs and their assistants to ensure all parents in their areas of jurisdictions took their children to school.

He said Sh180 billion, which is 30 per cent of the country’s total budget, was being used to fund educational activities.