Why Nairobi Speaker Beatrice Elachi has been impeached 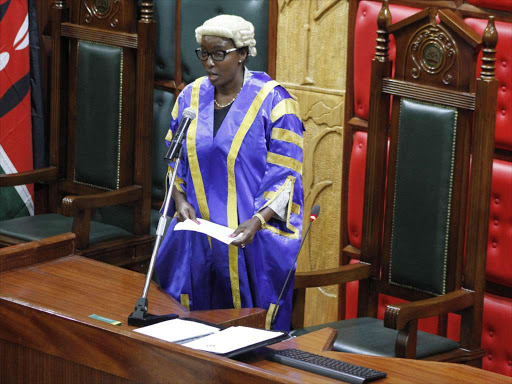 Nairobi county assembly speaker Beatrice Elachi on the floor of the house after being sworn in. /FILE

Some 103 MCAs voted to remove her from office, two voted against while two others abstained.

The MCAs removed her for causing 'great embarrassment' to the county assembly.

In a motion by

they held a special sitting to discuss Governor Mike Sonko's conduct and the speaker's impeachment.

actions and omissions have caused embarrassment

and brought the office of the speaker into disrepute," he said.

In the controversial purchase of the residence of the holder of the office of the speaker,

she is accused of actively interfering, threatening, bullying and intimidating staff to have a party.

This was despite having failed the

criteria for the award of the tender

and having quoted Sh125 million when the recommended

She is also accused of creating a markup of Sh25 million above what the market report recommended, evidence of which, they say is available from procurement records audio recordings.

The MCAs said Elachi's actions and omissions by undertaking the functions of the Board and inviting investigators to probe the conduct of officers of the county assembly was illegal and disrespectable.

This, they said, is despite her not having been in a board meeting to address

The motion notes that Elachi inappropriately spent public funds on a trip to Dubai, to ostensibly receive a "fake Honorary Doctorate Degree"

from the “London Graduate School"

She is also accused of making payments of Sh550,000 from taxpayers' cash for a suspicious “Dubai Leadership Summit".

payment through intimidation and

improperly to fund her deceptive personal travels. The evidence is readily available online," the MCA's said in a statement before the impeachment.

Elachi is also accused of

inappropriately spending public funds on dubious trips to Dallas and Texas in the US.

The MCAs claimed to have gone for a Diaspora Women Network conference when in the actual sense she was travelling for plastic surgery and knee surgery. They supported their allegations with a Sh1,000,000

She is accused of

interfering with the Women Caucus elections

where she unilaterally cancelled the results and ordered

Elachi is also accused of repeatedly starting assembly proceedings and holding sittings without quorum, contrary to the Standing Orders;

Earlier, Elachi claimed MCAs were pressured to sign a petition for her impeachment.

She alleges representatives were threatened that they would miss trips, be de-whipped or removed from committees.