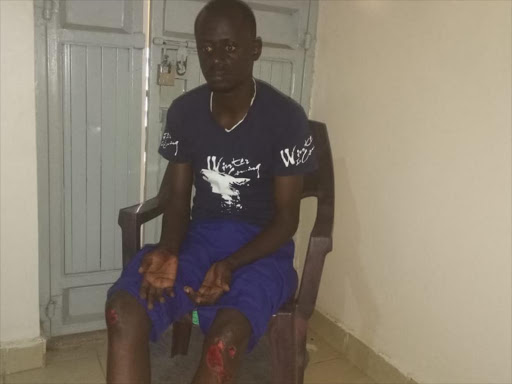 Oduor, who sustained bruises on his limbs after jumping out of a moving car, was treated at Aga Khan hospital in Kisumu and discharged.

At the time of his abduction, the reporter was in the company of a woman, only identified as Sharon.

The incident was reported at Kendu Bay police station. The whereabouts of the woman is unknown.

He would be bundled into a car which instead of heading to Rongo, sped off towards Kisumu.

While on the way, the 'abductors' started torturing Oduor and the woman as they drove towards Kisumu.

The journalist said one of the men held him by the neck in an attempt to strangle him.

He fought the men, opened the door and jumped out of the speeding car at Nyangweso market.

The vehicle stopped and the men started to chase him. Luckily, Oduor managed to seek refuge at a home by the road.

"I crawled through the bushes into the homestead. A good Samaritan took me to a police post before I was transferred to Kendu Bay Police Station."

Nation regional editor Aggrey Mutambo took Oduor to Aga Khan after the office was alerted of the incident.

The writer sustained injuries on his limbs. "Since it was late, I have told him to rest until he is fit to return to work," Mutambo told the Star on the phone.

Migori county director of communications Nicholas Anyuor said governor Obado is not aware of such plan.

"His name shouldn't be dragged into such criminal schemes. He also just read it the story online this morning," Anyuor said.

He condemned the incident and call for thorough probe so that the perpetrators can be punished.

"Let police do the investigations and take necessary action," he said.