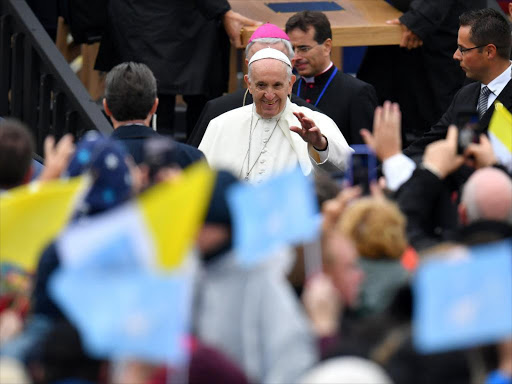 Pope Francis waves as he arrives at the Knock Shrine in Knock, Ireland, August 26, 2018. REUTERS/Dylan Martinez

Pope Francis has met victims of abuse and mistreatment in Ireland, telling them that those who abuse children were the equivalent of human excrement.

He spent 90 minutes speaking with eight Irish survivors of clerical, religious and institutional abuse during the first papal visit to Ireland since 1979.

The Pontiff told of the two abuse survivors that 'those involved in corruption and cover up within the church are 'caca", with his translator clarifying: 'Literally filth as one sees in the toilet'.

Pope Francis spoke with the group before attending a Festival of Families celebration yesterday at Croke Park Stadium in Dublin, where he received a standing ovation after telling the 82,500-strong crowd that 'to hate is human, to forgive is divine'.

He was greeted by enthusiastic nuns hoisting papal flags and performing Mexican waves at the event, where he stressed the importance of family, and warned people of the 'threat' social media poses to relationships.

He said social media should 'never become a threat to the real life relationships by imprisoning us in a virtual reality and isolating us from the very real relationships that challenge us to grow.

'When you use social media too much you go into a sort of an orbit when, at the dinner table, instead of talking to each other within the family, each of you uses his phone to connect with the outside world.

'You go into an orbit. This is dangerous. Why? Because it takes away the completeness of the family and... takes us to a fuzzy life without any substance.'

The evening included a performance of Riverdance by 500 children from dance schools around Ireland, and entertainment from local and international artists – joined by an orchestra of more than 50 musicians – including Andrea Bocelli.

The two-hour-long festival was choreographed as a celebration of family life, featuring music, song, dance, and spoken word.

The pope arrived at Croke Park for the mammoth festival flanked by burly bodyguards, after

The private meeting was hosted at the Papal Nuncio's residence in Dublin, hours after he acknowledged that Irish people had a right to be outraged by the church's response to the crimes.

The enthusiastic crowd's standing ovation rounded off the pope's first day in Ireland, which has seen him speak

of his 'pain and shame' at the 'grave scandal' of clerical sex abuse amid protests over the Catholic Church scandal – as thousands of admirers crowded the streets of Dublin to wave and watch him go by in his custom-made Popemobile.

The pontiff said victims had a right to be outraged at the 'repellent crimes' against young people, while Ireland's prime minister Leo Varadkar urged him to 'listen to the victims', saying the history of abuse had left a legacy of 'sorrow and shame'.

The Vatican says Pope Francis has met with eight survivors of clerical and institutional abuse on the first day of his trip to Ireland, which is ground zero for the Catholic Church's abuse scandal.

Vatican spokesman Greg Burke said Francis met with the group for about 90 minutes this evening. Among the victims was Marie Collins, a prominent survivor who served on Francis' advisory board but quit in frustration last year.

She has since become a harsh critic of the Vatican, and occasionally the pope.

The 81-year-old landed in Dublin this morning on an Alitalia flight from Rome – flying with the call sign 'Shepherd One' – to begin the first visit by a Pope to Ireland since John Paul II visited in 1979.

He greeted a country where Catholic loyalties are declining and which recently distanced itself further from the Vatican's teaching with a referendum vote to legalise abortion, three years after similar backing for same-sex marriage. This afternoon he met Ireland's first gay prime minister.

Tens of thousands gathered in Dublin as he passed through in his Popemobile, a Skoda Rapid model,

waving and smiling to the crowds on Dame Street. But demonstrators also assembled around the city to protest against clerical crimes, amid a row over the Vatican's response to similar claims of institutional abuse in America.

'With regard to the most vulnerable, I cannot fail to acknowledge the grave scandal caused in Ireland by the abuse of young people by members of the church charged with responsibility for their protection and education,' he said.

'The failure of ecclesiastical authorities - bishops, religious superiors, priests and others - adequately to address these repellent crimes has rightly given rise to outrage and remains a source of pain and shame for the Catholic community. I myself share those sentiments.'

'It is my hope that the gravity of the abuse scandals, which have cast light on the failings of many, will serve to emphasise the importance of the protection of minors and vulnerable adults on the part of society as a whole,' he said.

He also praised his predecessor, Benedict XVI, for tackling the issue, saying:

'His frank and decisive intervention continues to serve as an incentive for the efforts of the church's leadership both to remedy past mistakes and to adopt stringent norms meant to ensure that they do not happen again.'