I'll be back after September 4, says Miguna 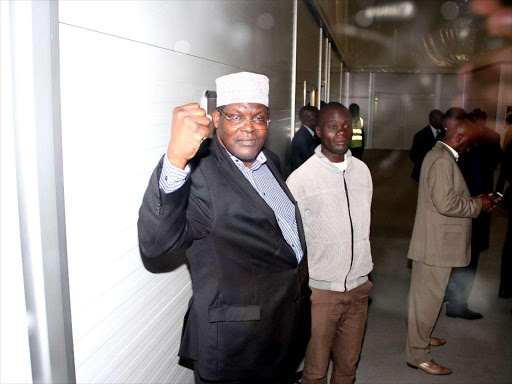 Lawyer Miguna Miguna has promised to come back to the country after September 4.

"I'm coming back after September 4th. Viva," he tweeted.

This is the third attempt to return to the country after his second deportation in March.

Miguna had announced that he would return on May 16 but he did not.

He was deported to Canada on February 6 following the swearing in of ODM leader Raila Odinga as the people’s President on January 30 at Uhuru Park.

He was accompanied by Ruaraka MP TJ Kajwang, who administered the oath and Siaya Senator and lawyer James Orengo.

Miguna stamped the documents during the inauguration.

The government argued that Miguna, who holds Canadian nationality, automatically lost his Kenyan citizenship by birth adding he was in the country illegally.

Interior CS Fred Matiang’i defended his decision to declare the lawyer a prohibit immigrant saying his decision was within the law.

He said the self-declared NRM General cannot be allowed to benefit from his blatant defiance of express provisions of the Constitution, as he obtained his Kenyan passport illegally through political patronage.

He added that Miguna lost his citizenship by operation of law upon acquiring his Canadian citizenship.

"I was informed by the Director of Immigration that the court has held before that Kenyans who became foreign citizens and came back after the 2010 Constitution and obtained Kenyan identification documents, cannot claim citizenship using the court process," Matiang’i said.

Miguna, however, filed a suit in court through his lawyer Nelson Havi arguing he has never renounced his Kenyan citizenship.

This saw High Court judge George Odunga fine Matiang’i, Immigration PS Gordon Kihalangwa and Inspector General Joseph Boinnet Sh200,000 each for contempt of court after they defied the order to produce Miguna, and further failed to honour summons to appear in court.