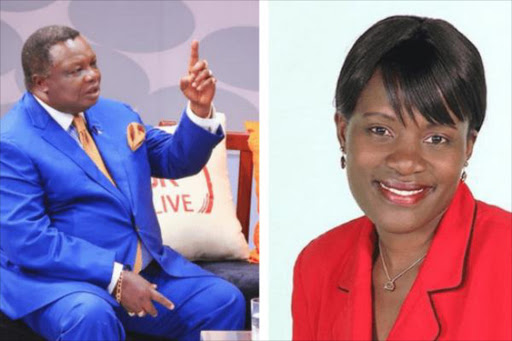 Kilobi 34, who spoke about their relationship with Atwoli said before the marriage plans, they were inseparable when they met in 2005.

"...we are very good friends. Anybody close to us knows that we are very inseparable," she said.

"Our friends never expected it.

He(Atwoli) said he does not want to be my boyfriend

or anything that is not marriage. I reached a point I dated many people and I felt like he treated me so well,

respects me and shows me, genuine love."

In a youtube channel posted on August 17, Kilobi said he met Atwoli in Uganda during an interview and they got in touch.

"In 2011, we would talk even once in a year and since then we have been in touch on a regular basis. He would come home in Bungoma since he is a family friend," he said.

Kilobi said their love is one that many admire adding that it's not about his money but the love.

"If people doubt that there is love then people who hang around me believe there is love. Atwoli loves me and being his status people will say it is his money," she said.

"It's not about his money.

I have met people with money before and I know people who have money do not respect people. He knows its not about his money... money is an added advantage."

The KTN presenter said they all work to secure their future in addition to the immense love they feel for each other.

"So much has changed. I am not able to catch up with my friends like I used to. Like I love going to the United States every August, this time round he said I'm not going anywhere," she said.

"You sit and agree on certain things. He keeps on reminding me that it's not easy to change someone but at least I need to adjust just a little bit."

Last week, Atwoli stunned TV viewers with praises for his new wife and the mention of his Sh5 million gold watch during an interview.

He confirmed his marriage to Kilobi who is half his age.

While explaining why he married Kilobi, Atwoli said his second wife

chose to engage in politics despite his advice against this.

"The reason I asked her not to pursue politics was that I needed somebody to take care of me. Since she joined politics, I married

so that she attends to me," he said.

The SG met Kilobi in Kampala 13 years ago while she was an intern at the Uganda Broadcasting Corporation.

"I was in the company with my second wife whom I released to do politics. At that particular time, we talked ... she was still young ... I told her that when she matured, whether it would take 1,000 years, I would marry her."