Money flows into a Nairobi River that never gets clean

The Nairobi Regeneration is the fourth attempt to clean the river; the first having began in 1999. 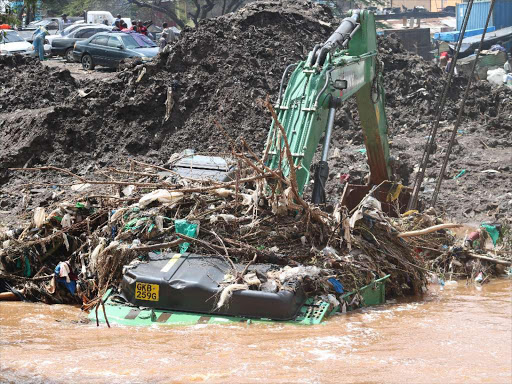 A National Youth Service bulldozer is pictured at the Nairobi River bank near the Globe Cinema roundabout, days after it was swept by flood waters, April 20, 2018. /COLLINS LANGAT

"In the not too distant future, you will be able to enjoy eating a bun as you bask in the sun on the banks of Nairobi River."

This is how this writer started a news feature published in the Daily Nation on November 14, 2007, when the Nairobi River Rehabilitation Programme kicked off.

This was just the first phase of the programme which would take three years and cost the government Sh16 billion.

More than a decade later, the realisation is that a bask with a bun may have been as ambitious as the grand Sh150 million joint programme of the government and the United Nations Environment Programme (UNEP).

The ongoing Nairobi Regeneration Programme is deja vu of sorts.

The exercise is the fourth attempt, the first having been the Nairobi Basin Programme which began in 1999.

There was a similar attempt to clean up the river between 2001 and 2003 but this too never bore any fruits.

In 2007, the rehabilitation of a 2.5km stretch from the Museum Hill roundabout to the Racecourse Road bridge cost an estimated Sh150 million.

The exercise was to involve the removal of solid waste, the repair of sewers, diversion of dry weather river flows and sewers and the formulation of a physical development plan.

The clean-up happened but what remains of the exercise is just the section between Museum Hill and the Globe roundabout. The rest is an eyesore.

As part of the exercise, there was a plan to clean up Nairobi Dam with the removal of the choking water hyacinth.

Today, the dam is dry earth with structures slowly coming up at the top, an extreme outcome for where small boats were once seen.

There are many similarities between the 2007 project and the current exercise, to which Treasury CS Henry Rotich allocated Sh800 million in the budget.

When the current exercise kicked off, Environment CS Keriako Tobiko visited the various sections to be sorted accompanied by Nairobi county officials.

Similarly, in 2007, then Environment Principal Secretary James ole Kiyapi and then Town Clerk John Gakuo made regular visits and were directly in charge.

In the 2007 exercise, the government identified some 120,000 people living in informal settlements next to the river who were to be relocated.

A similar number of people have been cited in the ongoing exercise.

More striking is that the National Environment Management Authority (NEMA) announced that it had identified over 4,000 structures within 30 metres of the riparian reserve for demolitions.

"We are talking about 4,236 structures, both settlements and some businesses that may be affected in areas like Kibera, Mukuru slums, Mathare, Kiambiu, Mukuru kwa Njenga and others," then NEMA boss Dr Muusya Mwinzi said at the time.

Four thousand is still the number that the regeneration team is targeting but with a history such as this, the question remains whether the mission will be accomplished.

Sam Avery, a Chartered Consultant in Hydrology and Water Resources, notes that the way in which the demolitions are being done is concerning.

"Restoring land in riparian zones needs to be done carefully and should be subject to water, environmental, health and safety legislation safeguards. For example, the demolitions are risky and create waste that pollutes rivers and possibly contains hazardous materials," says the Associate of the Department of Geography at the University of Leicester.

In 2009, former Environment Minister John Michuki was praised for reviving the river that had been ‘killed’ by the dumping of human and industrial waste.

Years after Michuki died, the river is once again foul and garbage is strewn in the city centre.

Will Nairobi River get clean this time around? This must be a question in the minds of most Nairobi residents.