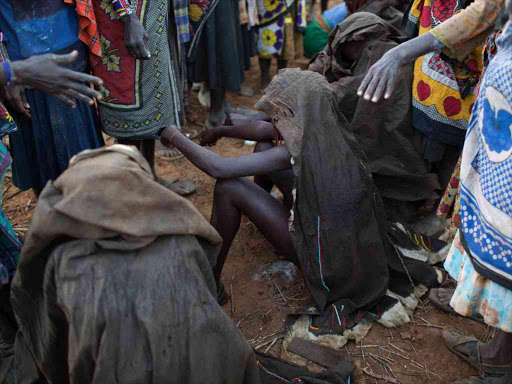 Pokot girls, draped in animal skin, sit on rocks during their circumcision ceremony in a village about 80 kilometres from the town of Marigat in Baringo county, October 16, 2014 /FILE

Nasorot village, Baringo, is mourning the killing of their 13-year-old daughter who was allegedly beaten to death by six Pokot warriors for refusing to marry a man of 60 years as a fifth wife.

The teenager who died on Saturday was among a group of girls who recently underwent Female Genital Mutilation.

"Her parents forced her to marry an old man. She refused and village warriors descended on her with beatings. She lost her life as she was being 'disciplined'", a source told the Star on Sunday.

The suitor was to give livestock to the girl's family for dowry.

Contacted, Tiaty East Deputy Commissioner Steve Muonge said he had not received a report on the death.

"If that is true, the culprits should be arrested immediately to face murder charges. I will instruct officers on the ground to take up the matter," he said.

Sources said villagers were preparing for a traditional cleansing ceremony known as "Labai" to punish the wrongdoers.

The clan of the culprits will be required to give a large number of cows and goats as a fine. The animals will be shared evenly among members of the girl's clan.

"If the agreed number of animals is 600 cattle, there is an agreement to ensure generations of the accused clan

complete paying the animals so they can be forgiven and cleansed," the source said.

Tangulbei Women Network chairperson Mary Kuket condemned the practice. She said the attackers should be arrested to face the law.

She said the expansive Silale and parts of Tang’ulbei-Korossi wards lack religious places of worship and schools, as a result, illiteracy is high.

"It is heartbreaking to lose such a young life. Efforts to fight FGM and early marriages should be doubled," she said.

Kuket said many cases go unreported because they are solved locally.

Baringo is majorly inhabited by the Pokot, Tugen and Ilchamus pastoral communities who depend on livestock for a living.

Dowry for a circumcised

Pokot varies from 60 goats, 30 cows or 20 camels, depending on the agreement between families.