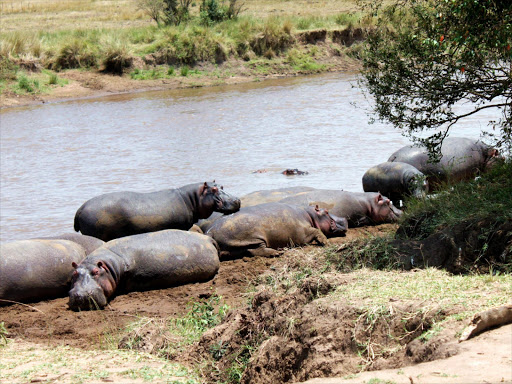 Anthrax has been detected in dead hippos floating in the Okavango River, officials in Botswana said on Wednesday. /FILE

A Chinese tourist has been killed by a hippo while taking pictures at Lake Naivasha.

"KWS is sad to announce the death of a tourist who was attacked yesterday evening. His colleague survived with minor bruises and was treated at Naivasha District Hospital. We are tracking the hippo," KWS said in a tweet.

The attacks brought to six the number of people who have been attacked and killed by hippos in Naivasha since the year began.

The Chinese Chuang Hun was in the company of friends taking pictures near Sopa Hotel when the hippo attacked.

Witness James Omollo said the foreigner got too close to the animal which turned against him, biting him on the chest.

“He was rushed to Naivasha Subcounty Hospital bleeding profusely, but he passed on while undergoing treatment,” he said.

Chairman of Lake Naivasha Boat Owners Association David Kilo said the rise in water levels had contributed to the increase in hippo attacks.

He said when the water rises, pasture for the hippos is reduced, forcing the animals to stray into nearby hotels and farms.

"The hippo that attacked the Chinese was looking for pasture near the hotel. This is not the first time,” he said.

In another incident, an illegal fisherman was attacked by a

hippo a few kilometres from the scene of Sunday's incident. He died at the scene.

Kilo said that the middle-aged man strayed into an area where the hippos were resting, leading to the fatal attack.

"The man was also bitten on the chest.He died minutes after he was retrieved from the lake," he said.

Kilo, who is also an honorary warden, said that closure of wildlife corridors and encroachment of riparian land has contributed to the rising attacks.

"We have seen a rise in cases of human-wildlife conflict around the lake and this is mainly due to the encroachment on the riparian land," he said.

Naivasha police boss Samuel Waweru confirmed both incidents. He said the body was

taken to the mortuary.