Naked bribery in the House as MPs reject sugar report 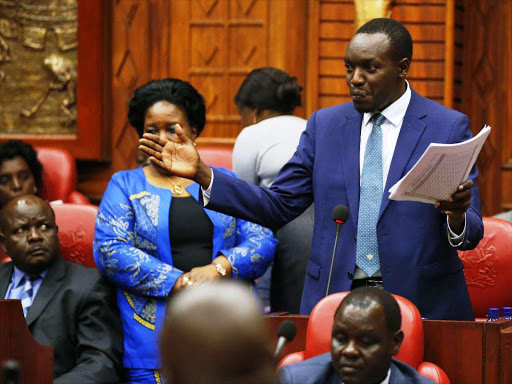 Debate was punctuated by protests and claims of bribery from across the divide as MPs closed ranks to jettison recommendations against Rotich, Adan and former Agriculture CS Willy Bett.

In the most ignoble scene yet, lawmakers were seen openly scrambling for Sh30,000 allegedly dished out to shoot down the report.

It all began ten minutes before the afternoon sitting with the suspect movement of legislators to a room in the New Wing Bar of the Senate where the ‘facilitation’ fee was quickly dished out.

The lawmakers soon formed a long queue as an MP from Rift Valley held a list allegedly containing names of beneficiaries.

It was not clear the source of the money or whom it was intended to shield from indictment.

“We cannot pass a report whose members cannot agree on anything. I am aware of some members meeting before the session to share some loot but

we will shoot it down purely on our own conviction,” an MP who sought anonymity shouted to the Star as he headed towards the chambers.

Minority leader John Mbadi made reference to the bribery claims when he shot up to oppose the amendments saying: “I don’t want to be seen to have benefited from the rumour going round in the House.”

“I had to leave the President’s event to come to the House late so that I am not seen to have eaten,” said Majority leader Aden Duale, giving credence to reports that MPs pocketed paltry amounts to sacrifice the public interest.

Had MPs adopted three sweeping amendments by Homa Bay woman representative Gladys Wanga, the President would have been compelled to step down Rotich and Adan from the Cabinet.

Wanga wanted the ‘scandalous’ report amended to hold Rotich responsible for failing to specify the quantity and quality of sugar that was to be imported during the duty-free window last year.

She also wanted Rotich to take

responsibility for the excess 453,7560 metric tonnes of sugar imported during the waiver period.

“The CS should be held responsible for the over-importation of sugar. If this is not killing the sugar industry in the country, then tell me what it is,” she said.

Wanga, who was backed by frustrated MPs from the sugar-growing counties of Western and Nyanza regions, also wanted firms that imported the commodity to be punished. The proposal was rejected.

In her amendments, Wanga also sought to compel the government to sample all the sugar

in the country and subject it to thorough testing for heavy metals including mercury, lead and copper.

“They should tell us if the sugar in the shelves is safe for consumption or not,” she told the House as she moved the amendments.

The day of heightened drama was also the moment that united the Majority and Minority leaders who led their troops in opposing the report they termed as vague.

Duale said the report did not answer specific questions in the minds of Kenyans, including whether the Sugar in the market contains mercury, and the names of the companies that imported.

He warned members that there were attempts by some lawmakers to use the sugar report to settle political scores and fire Cabinet secretaries without going through the impeachment procedure provided in the Constitution.

“Let us use our resources to bring a substantive motion to debate the CSs and not try to impeach them through the back door. The threshold for the impeachment of a CS is so high,” Duale said.

Rejecting the report, Duale warned against indicting Mohamed for the Kenya Bureau of Standard’s failure to conduct surveillance to make sure poisonous or illegal sugar did not get way into the country.

the same salvo, dismissing the report as lacking the requisite evidence to hold Rotich, Mohamed

“I have decided to sacrifice political expedience and do what is right. I have had issues with Rotich on performance but on this one I don’t find anything Rotich did which was wrong,” Mbadi said in a rare gesture of support for

He said the sugar imported during the waiver period was insufficient, in the first place, to bridge the deficit, adding that the failure by the committee to invite Bett to defend himself compromised the report.

“Even if there is politics

we have to play, we have to be serious because there is nothing to hold Rotich to account for. If the committee wanted Bett to be held responsible, it should have invited him to defend himself,” he added.

“What mistake did Rotich commit?

I don’t see anything other than sacrificing Rotich and I oppose the report,” he concluded.

Earlier amendments by nominated MP Geoffrey Osotsi to compel the government to put an embargo on the importation of sugar, as well as audit the sugar in the market, were also rejected.

Osotsi wanted the government to conduct a thorough audit within 21 days to determine the amount of sugar imported between May-August last year, during which Kenya allowed duty-free sugar imports.

A spirited fight by Majority Whip Benjamin Washiali, to table a letter allegedly written by Bett advising Rotich against issuing an open importation window, was rejected by Speaker Justin Muturi as inadmissible.

“I am surprised that the letter from Bett is not part of the annexure in the report yet it was tabled in the committee,” said Washiali, noting that Rotich ignored Bett’s advise which occasioned the over-importation.

After the report was shot down, some MPs convened a press conference and accused their colleagues of having been paid to reject it.

Opposition MPs accused Duale of dancing to the tune of the government at the expense of the interests of sugar farmers.

“Mbadi, you are our Minority leader, not Duale's deputy. Our people are suffering,” said Osotsi.

Muhoroni MP Onyango K’Oyoo said the country had lost an opportunity to save the sugar industry.

“The move negates Uhuru's pillar of industrialization. Members have given this good debate a raw deal. It is a sad day for this country and most of us from the sugar growing area,” he said at the media briefing.

“There was intense lobbying and that was unfortunate. I was not among members who received the money. A number of you were in that room where bribes were dished. Report what you saw,”