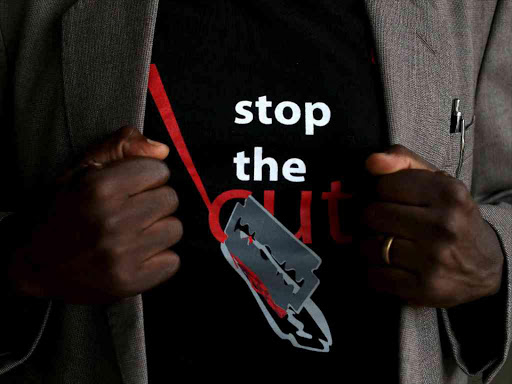 A man shows the logo of a T-shirt that reads 'Stop the Cut', referring to Female Genital Mutilation (FGM), during a social event advocating against harmful practices at Imbirikani Girls High School, April 21, 2016. /REUTERS

Two of the girls were taken to Kapenguria Teaching and Referral Hospital for treatment while four escaped with their parents.

Area chief Israel Atukole said he got a tip-off from neighbours that the girls had been circumcised at Parek village.

Atukole said he mobilised police reservists who raided the village and arrested two parents, the circumcisor and rescued two girls.

"Four girls who had been cut and their parents managed to escape. We have launched a search for them. Cases of FGM in my location have been rampant. We have increased patrols to ensure no more girls undergo the cut," he said.

One of the police reservists Samson Ngole said they raided the home at 6.00 am on Tuesday morning.

"These days they cut the girls in secret. The girls were cut on Monday night. They are between 12 to 15 years. One of the girls is a Standard 8 candidate and was set to be married off before doing her KCPE," he said.

He added they face a challenge to rescue more girls because of the hilly terrain that hinders them from accessing some places.

"We had to walk for more than 30km to get to the girls but unfortunately some of the parents escaped," he said

Anti-FGM activists have condemned the incident, saying such cases are rampant during this holiday.

"It's saddening that some girls bleed almost to death. We urge security officers to help us get the remaining suspects and take them to court," said Domitilla Chesang, an anti-FGM ambassador.