Rotich: why Judiciary budget was slashed 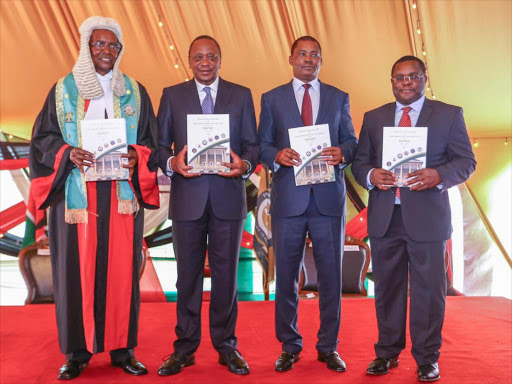 Chief Justice David Maraga, President Uhuru Kenyatta and Speakers Justin Muturi (National Assembly) and Kenneth Lusaka (Senate) during the launch of the State of the Judiciary and the Administration of Justice Annual Report 2016 -2017, December 15, 2017. /PSCU

The National Treasury has defended the reduced funds allocated to the Judiciary in this year’s budget, saying it did not have enough money to spread out over competing needs.

Responding to the Judicial Service Commission’s alarm yesterday, Treasury CS Henry Rotich said the Judiciary, like other government institutions, presented its wish list for the year to Parliament.

But it was allocated funds based on the available revenues and priorities.

“We had to balance between many competing needs and priorities,” Rotich told the Star.

The Judicial Service Commission called a press conference yesterday to raise the alarm over under-funding. It accused the national government of assaulting the independence of the Judiciary by slashing its budgetary allocation.

Chief Justice David Maraga said the reduced funding will have far-reaching consequences on the administration of justice and the Judiciary’s modernisation programme.

“The main consequence of these drastic cuts is that more than 70 court construction projects will, without doubt, stall. This is more so because the World Bank funding, through which 29 of the projects are financed, expires in December and there seems to be no willingness to extend it,” Maraga said. The CS is chairman of the Judicial Service Commission.

But National Assembly Budget and Appropriations committee chairman Kimani Ichung’wa said that his team rationalised all the proposed allocations and concurred with most of the decisions the Treasury had made.

“Kenyans have unlimited needs for resources but unfortunately resources are limited,” Ichung'wa said.

He explained that because of the two elections, the Kenya Revenue Authority did not meet its targets and so Treasury had to work with what was available.

“The elections left us in a hole but this situation can be reviewed if the revenue collection improves, especially after the handshake and businesses are also improving,” Ichung'wa added.

The Judiciary had requested Sh31.2 billion to fund its operations for the current financial year. It was allocated Sh17.3 billion.

The proposals comprised Sh19.8 billion for recurrent expenditures, Sh11.4 billion for development and Sh891 million for the Judicial Service Commission.

But the National Treasury Budgetary Policy Statement capped the Judiciary’s budget at Sh17.3 billion, of which Sh13.3 billion will go towards recurrent expenditure and Sh4 billion to development spending.

JSC operations — comprising administrative activities, maintenance, conference and travel, among others — were capped at Sh479.6 million.

However, when Parliament passed the Appropriation Act, the Judiciary’s total budget allocation was further reduced to Sh14.5 billion.

The development budget had been slashed to a paltry Sh50 million compared to Sh2.6 billion in the 2014-15 Financial Year.

The Sh50 million is expected to cover new and ongoing projects, repairs and maintenance, as well as ICT infrastructure for the courts.

“We are at a loss over how to use this money,” Maraga said, adding that the cuts will severely affect their operations, beginning with the 50 mobile courts that will cease operation immediately.

“This is because our backlog clearance strategy involves moving judges and magistrates from their stations to assist in areas with heavy backlogs during service weeks. With the current budget allocations this will no longer be possible,” the CJ said.

Also affected by the budget cuts include the plans to digitise registries and modernise the court system and more than 70 court construction projects.

The situation is compounded by the imminent expiry of the Judicial Performance Improvement Project (JPIP), the Sh11.5 billion World Bank loan facility through which many Judiciary projects have been funded.

“JPIP became effective in April 2013 and is scheduled to end in December 2018, unless the government agrees with the World Bank to extend the project period. Of the Sh11.5 billion, the total amount disbursed so far is only Sh5.3 billion with a further Sh5.2 billion committed in ongoing works,” Maraga said.

The CJ hinted that the Judiciary had sought a 22 months’ extension until October 2020 to allow for completion of all the pending and planned activities and avoid unnecessary liabilities falling on the government budget but Treasury declined.

The constructions which will be affected by the budget cut are at various stages of completion. They include law courts in Homa Bay, Marsabit, Kabarnet, Amagoro, Kandara, Githongo and Machakos.

They require Sh1.9 billion to complete.

The CJ said he had tried unsuccessfully to reach out to authorities to find a solution. He had pointed out that the Judiciary exists to serve the common person by ensuring the efficient administration of justice and facilitating smooth commercial interactions between business entities.

The visibly frustrated CJ said that there can be no justification to impede the work of the Judiciary through budgetary strangulation.

The Judiciary’s alarm comes less than a week after President Uhuru Kenyatta froze expenditure on new government projects until the old ones are completed.

Only initiatives related to the Big Four — which he said will still require express authority from the Treasury — would be allowed.

“Even if new projects are aligned to the Big Four, they cannot be started without express, written authority from CS or PS of the National Treasury,” President Kenyatta said.

He warned that government officials who release funds for new projects would be held responsible.

Annual reports of the Auditor General chronicle pervasive waste and misuse of public resources. In some instances, projects are abandoned half-way in favour of new priorities, while others are starved of funds after one allocation and abandoned by contractors.