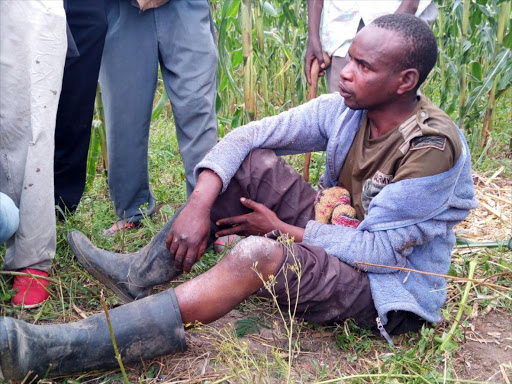 John Mwaura pleads with his neighbours after he was caught having an unnatural act with a cow, Wednesday July 18, 2018. /RITA DAMARY

A man escaped lynching in Bahati, Nakuru on Wednesday after a mob accosted him for bestiality.

John Mwaura, 29, was reportedly caught pants down after he sneaked in the compound to engage in the unnatural act with

On being pressed by the locals, Mwaura confessed to having committed the act saying this was the fifth cow he had accosted sexually.

"It is not my first time. I have had sex with four other cows in Ndunduri and Wanyororo. I am pleading for mercy," he said.

The owner, who had gone to the farm to harvest her crops, came back and found the man zipping up his pair of trousers.

The woman descended on him with blows, stones, and sticks, leaving him with critical injuries.

"Don't kill me...let me surrender my piece of land to pay for the cow," Mwaura said.

"I always have sex with the cow whenever I feel like because I fear girls might infect me with HIV."

The man further said he is not married adding that he was overwhelmed by the urge to have sex.

The angry villagers demanded that he compensates the woman with another cow saying it was a taboo for the defiled animal to remain in the compound.

Albina Grace, a neighbour, derided men who engage in such acts saying they should know that the Bible condemns bestiality.

Jeremiah Mbuthia, a pastor, said such behaviour is a medical condition. "A normal person would fight for his wife not for a cow as Mwaura did."

Mwaura was whisked to Wanyororo police station where he is expected to be questioned before he is charged.