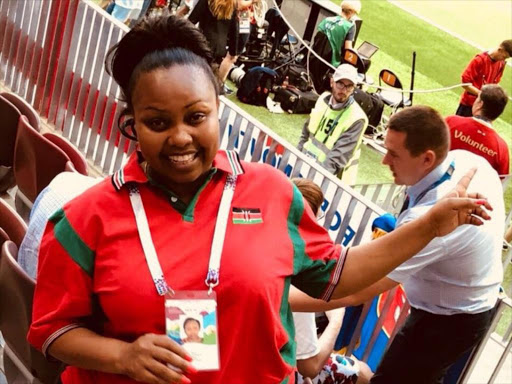 Nominated Senator Millicent Omanga in Russia. She is accompanied by 19 other legislatures. /COURTESY

Kenyans on Twitter have reacted furiously to news that 20 MPs have travelled to watch the World Cup at taxpayers' expense.

established that 14 members of the National Assembly and six senators are in Russia at the expense of the Kenya government.

Sports CS Rashid Achesa said officials from his ministry have not travelled to Russia.

The politicians travelled in two batches, one group leaving on July 2 and another on July 5.

They are expected to stay in Russia until after the World Cup final on July 15.

But this did not go well with Kenyans as they hit back at the Members of Parliament saying they should not have travelled with public funds.

"What do Kenyan MPs smoke? So we sent 20MPs to Russia to benchmark on how to host tournaments at Bukhungu stadium or Kamukunji grounds. Big4/vision2030 are pipe dreams with this kind of priorities," @allen_arnold said.

@ConsumersKenya said "No difference with the scandals they have been "investigating". Who will save Kenyans from #RipoffKenya? Solai community in Nakuru still reeling in pain of lost livelihoods as Sen. Millicent Omanga and others take selfies in Moscow."

"The bloody Kenyan legislators going to Russia to watch football and yet they don't have the willingness to enable Kenya to play World Cup so soon," @ArapChemiso said.

@mwangid said "This benchmarking nonsense is being taken too far by politicians.i can understand if the GoK paid for the CS Sports or a Kenyan official from the football association to represent Kenya’s interests but what the hell are 20 MP’s and Senators doing in Russia on tax-payers money?"

"Some Kenyan members of parliament on a benchmarking trip to Russia. But on what basis?" Paul Oima posed.

@Peter02072787 said "Send Kenyan football players that they know and see how it is done not 20 corrupt MPs who don’t watch local football,can afford with the money they have stolen."

He added "The other day a pastor in Uhuru park and the week is not over 20 MPs to Russia . We are watching."

@OdongoOwoko said "Let me not hear that someone used our taxes to go to Russia for bench marking. I shall mobilize Kenyans we storm Parliament and beat them."‏

Senators were to be led by Johnson Sakaja (Nairobi) but he cancelled his travel to deal with other issues affecting Nairobi residents.

The lawmakers travelled when accommodation charges, air tickets and food prices have skyrocketed as the world floods into Russia for the World Cup that happens every four years.

Parliament defended the trip as official benchmarking to give MPs first-hand experience on how to host international tournaments.