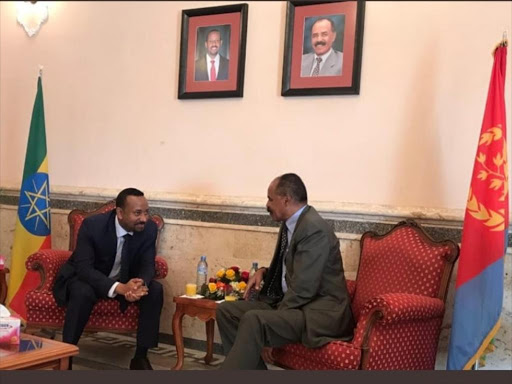 President Uhuru Kenyatta has lauded the handshake between the leaders of Eritrea and Ethiopia in Asmara.

The historic meeting comes after almost

two decades of differences between the two nations.

“I congratulate Ethiopian PM Dr Abiy Ahmed & Eritrean President Isaias Afwerki for choosing the path of talking to each other & beginning the journey of friendship. Kenya is a proud neighbour. I agree with @Paulkagame, we are together with you,”Uhuru tweeted.

Kagame, who is the current Chairperson of the African Union Summit, welcomed the meeting.

“We salute the leaders, PM of Ethiopia Dr.Abiy Ahmed and President Isaias Afewerki of Eritrea for their courage and doing the right thing for their people of the two countries! We congratulate you and are with you....!” Kagame tweeted.