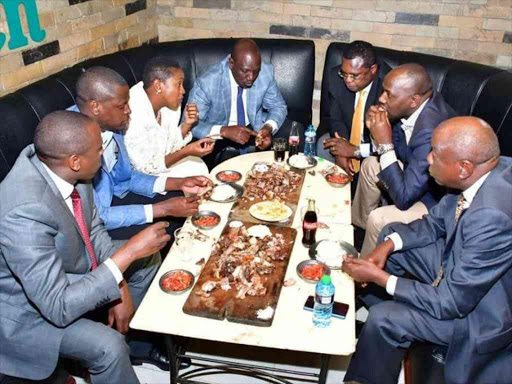 Deputy President William Ruto kept the succession debate alive yesterday when he said contrary to public perception, Kikuyus do not owe him any debt.

The track by Kimani wa Turacco brings to the fore the robust political debate in vote-rich Mt Kenya region whether to back Ruto in 2022 to reciprocate his support for President Uhuru Kenyatta in the 2013 and 2017 elections.

The song asks voters from Central region not to endorse Ruto’s presidential bid in 2022 just because he backed Kenyatta in two consecutive elections – 2013 and 2017.

“We owe nobody no debt. The only debt I know is that of M-shwari. Acha sasa kieleweke (let us get to the bottom of this),” the artist from President Uhuru’s Gatundu backyard sings.

The song delves into the mayhem triggered by the 2007 bungled Presidential election results to remind its Kikuyu listeners of members of the community slaughtered and then set ablaze in Eldoret as testimony that they can forgive but never forget.

The lyrics suggest Ruto was paid for his political debt by being appointed Deputy President.

“We went hunting together and when we slaughtered the debt, we shared equally... we owe nobody any debt and if any, maybe that of M-shwari,” part of the lyrics say.

“We can forgive but we cannot forget. Do not say they are saved. Being saved will not prevent him from plucking someone’s maize,” the singer says in another part of the song.

Only two weeks ago, the Kikuyu Council of Elders told Ruto to retire together with Uhuru when his term ends in 2022, opening fault lines between Uhuru and Ruto’s allies.

But yesterday while speaking at the All Saints Cathedral in Nairobi, Ruto called on leaders to foster unity and development in the country and shun divisive politics.

“I want to remind leaders what Paul says in Romans 13:8; owe no man nothing except the debt of love for one another. That is the only debt that all of us have,” Ruto said.

“I know there is a debate on who owes who what in the public domain.... For those of us who have been elected, we have the debt of ensuring that our commitments are fulfilled for the transformation of our country.”

He dismissed reports that Kikuyus as a community owe him a political debt is unfounded.

“We want a country that is free of hate, division and ethnicity because we are citizens of one country, created by one God and we are serving the entire humanity of the Kenyan nation,” he insisted.

“We welcome all forms of support from different quarters; the entire Kenyan fraternity should also join hands and aid the government in making our country better.”

“No person, no community, no section of Kenya owes anybody, including myself, anything. We owe ourselves the debt of love for one another because the Bible says; loving one another is fulfilling God’s commandment,” said the DP.

Nyeri Town MP Ngunjiri Wambugu, who has openly come out to oppose Ruto claimed that Deputy President’s allies are blackmailing Kikuyus living in the Rift Valley over possible violence.

Ngunjiri posted: “Anyway 2022 is far. But we are watching. As I said yesterday when I spoke on this 2022 issue watu wakuje pole pole, wakiwa na heshima (people should tread carefully, and with respect).”

The fear of “betrayal” has forced Ruto to scout for political allies, loyal politicians as well as influential power-brokers in Central Kenya to prop up his 2022 bid. Die-hard Ruto supporters in the Rift Valley have described the song as ‘”hate speech” ochestrated by Ruto’s critics.

“These songs you’re hearing… these handshakes you see…we want to assure you that, as leaders from the Rift Valley, we are behind William Ruto and we will not allow anybody to disrespect our leader and the journey he began long ago,” nominated MP Gideon Keter said.

Keiyo South MP Daniel Rono said: “The issue of singing to us about debts…we will not be shaken by that. We went round in 2013 and 2017, brought votes and Ruto and Uhuru went to State House. That is the same way we will go round in 2022.”

Muchomba observed that the region owes Ruto for his support of President Uhuru in capturing the top seat twice.

She denied claims by some Ruto’s allies that “cartels” in Uhuru’s administration had hatched plans to block Ruto from ascending to power.

“During the 2013 and 2017 campaigns, we promised to back Ruto. That is a debt and we will not backtrack on this,” she said during an interview with Radio Jambo.

Muchomba said that support for Ruto was anchored in Jubilee’s 20-year plan and that it should be fulfilled to the latter.

“There are some individuals who are trying to distract the 20-year Jubilee plan and make it look like betrayal,” Muchomba said.

Kikuyu Council of Elders national Secretary General Peter Munga told the Star recently that Ruto is part and parcel of the current presidency and should therefore prepare to exit with Uhuru administration.

“As a Council we are very serious that he (Ruto) has to pack with Uhuru. If Uhuru has to leave in 2022, the deputy should follow suit,” Munga said.

Munga said Ruto should be satisfied with his 10-year tenure as DP because he has severally announced that he gives his boss his best advise.

“This is no time for campaigning. The 2022 election should not even be on the lips of any Mt Kenya politician. They should be talking about roads that need rebuilding, coffee sector that needs to be fixed, the tea sector that needs to be managed and the dairy industry and horticulture that have been mismanaged by having 35 years of non-Kikuyu ministers of agriculture,” he said.

“You look at the looting that is being done by the people who are in charge of the NCPB, they are all people from the North Rift,” he said.

Murkomen has since warned that Jubilee might disintegrate if Kenyatta doesn’t rein in top government officials out to scuttle Ruto’s ambitions.

“Unfortunately, because these people have a responsibility on policy direction of government, we have a situation where things like policy on lifestyle audit are announced without the knowledge of anybody governing Jubilee,” Murkomen said.

Last year, a song featuring a group of Kikuyu artistes went viral on social media and provoked mixed reactions over its theme and agenda.

Its lyrics were anchored on the political tussles between Uhuru’s Jubilee and Raila’s Nasa at the height of the presidential campaigns.

The singers narrate: “Raila is inciting other communities against the Kikuyu community and that it is high time that Kikuyus come out in large numbers to vote for Uhuru and not to allow power to slip out of their hands”.

The vernacular song was perceived to have coded message that propagates hate.

“We are a blessed race. Listen to what Joshua bandia is saying that we be chased from all places where we have bought farms. Gema and Mt Kenya, we need to speak in one voice and say ‘it is Uhuru’.

“There is a trap called NASA we should avoid. If we let power go from our hands, if ‘these’ people rule us, we will regret it. They have said if they take power Gikuyu ‘will see’. If you don’t come out on 8.8.17 you will be committing suicide.”

In June 2014, musician John Ng’ang’a, popularly known as John De’Mathew, was found innocent in a hate speech and incitement-to-violence case.

De’Mathew had been accused of producing and publishing songs in Kikuyu with words intended to cause violence.

A Nairobi court ruled that his song Mwaka wa Hiti (the Year of the Hyena) does not propagate ethnic hatred.

In the song, De’Mathew had been accused of using the words: “When Abraham disobeyed God, he was ordered to be circumcised. You General of Migingo, the panga is being sharpened”.

However, Nairobi magistrate Elena Nderitu said the words in the song produced in 2010 “do not directly refer to Raila or any other politician”.

The Mugithi singer was charged after the then NCIC chairman, Mzalendo Kibunjia, ordered an investigation into the songs “Mwaka wa Hiti” composed by De Mathew, “Hague-bound” by Muigai wa Njoroge, and “Uhuru ni Witu” by Kamande wa Kioi.

The commission hired the services of a translator to interpret the three vernacular songs and determine whether, as claimed, the songs contained tribal, divisive and inflammatory messages.

But the cases hit a snag and no witnesses were called to testify. Njoroge and Kioi wrote to the commission requesting for an out-of-court reconciliation, which was granted. De’Mathew pressed on with the case until he was cleared by the court.