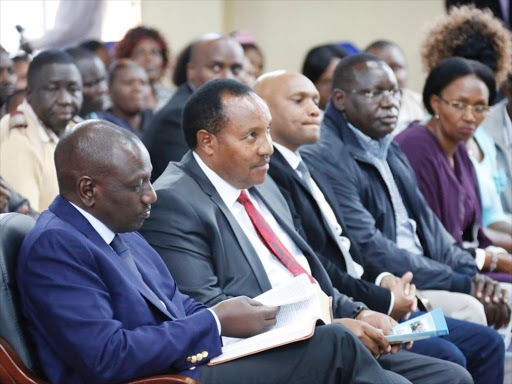 Deputy President William Ruto has told off critics of his frequent countrywide tours and harambees, especially for churches.

Speaking to religious leaders at Thika’s Blue Post Hotel on Sunday, Ruto did not reveal the source of his money, only telling his critics he is not bothered by scrutiny.

Like President Kenyatta and other leaders, Ruto will be subjected to a lifestyle audit in the war on corruption.

("Some people condemn me for going around, raising money here and there and in church. It’s up to them. I’m investing in heavenly matters. If you want to invest elsewhere, that is your right.")

("Some people invest in funerals, let them continue. Isn’t that democracy? Let’s go on.")

ODM leader Raila Odinga has questioned the source of Ruto’s funds, which he has been donating in harambees across the country. Raila has also challenged his former deputy to take a lifestyle audit, saying he is living beyond his means, as his salary is known.

The opposition leader asked Ruto to stop campaigning across the country and instead focus on his job as Deputy President.

“Wacha kurandaranda hapa na pale, kutangatanga ati wewe utakuwa rais mwaka 2022.” ("Stop loitering around here and there, claiming you will be President in 2022.")

“How do you know [that you will be President?” It’s Kenyans who elect their President. Then you pour money here and there and then say ‘we do a lifestyle audit’,” Raila said.

But Ruto on Sunday, without referring to anyone, said he had done nothing wrong. He said he was happy to meet and work with religious leaders because he knows the value of doing so. “This is a good thing. No leader succeeds without the prophets. The President and I will not slow down on the development agenda,” he said at St Benedict Catholic Church in Ngoingwa in Thika.

While Ruto has previously said he acquired his wealth by what he describes as hustling, questions regarding his wealth have persisted in the recent past.

It is well known that he has considerable interests in the hotel industry in Nairobi and recently at the Coast. He has been associated with Africa Merchant Assurance Company, Amaco, Easton apartments in Eastlands, flats in Ongata Rongai, some houses in Eldoret and tens of parcels of land countrywide.

According to the Salaries and Remuneration Commission, the President and Deputy President earn monthly gross salaries of Sh1.4 million and Sh1.2 million, respectively.

Apart from Ruto’s allies, a section of ODM lawmakers and civil society groups have also raised Ruto’s activities. Yesterday Raila once again backed President Kenyatta’s decision to order a lifestyle audit starting with himself, his deputy, governors and all senior government officials.

Ruto has remained silent but in an indirect rejoinder, his ally Kapseret MP Oscar Sudi last weekend said Uhuru’s family should be audited, going back to Founding President Jomo Kenyatta.

Raila said he is ready for a lifestyle audit to assess how he got his wealth and urged the government to hire the services of international audit firms because local ones might be compromised.

He said foreign firms helped unearth the Anglo Leasing scam and therefore stand a better chance of doing a professional job on the audit. Raila spoke during his party’s NEC-Parliamentary Group meeting in Mombasa yesterday.

“Corruption is on the rise, figures are mind-boggling, suspects are high and mighty,” he said.

Raila said the county is tired of “politics, which gives room to corruption”. Kenyans should refuse to be distracted by politics of succession,” he said.

Raila told Kenyans not to worry about those politicking now, as “they will find themselves behind” when the 2022 electioneering period starts. Raila said corruption cartels are using alarm bells to shield themselves from prosecution.

“They politicise the war on corruption and scare the government that we are agents of foreign masters,” he said. “We have changed tack and assured the government we are together on this war. We are no longer whistle-blowers,” Raila said.