Raila to Ruto: 'Your presidency is not guaranteed, stop loitering' 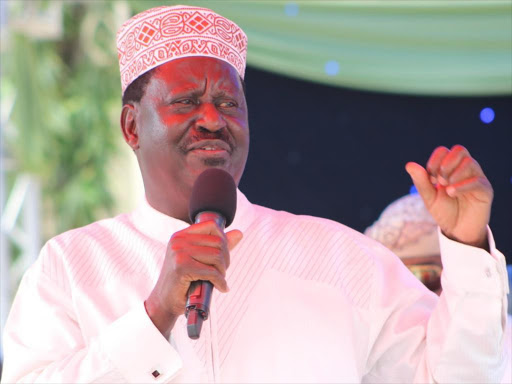 This was in reference to Ruto's weekend tours which is argued as likely to put the country in a campaign mood before the dust of the 2017 poll settles.

The DP is always accompanied by politicians who have been making statements on the 2022 presidential race.

But Raila dismissed the moves telling the DP: "You are not sure (if you'll be elected)."

He made the remarks on Sunday when he joined Governor Hassan Joho for this year's Eid Baraza in Mombasa.

In another veiled attack, ostensibly aimed at the DP, Raila said some people should not dare call for a lifestyle audit.

"You are dishing out cash. We know your salary. Don't ask for a lifestyle audit. We know the thieves," he said.

Last Thursday, President Uhuru Kenyatta called for scrutiny of state officers' wealth, saying he is ready to take the lead​.

He also said other leaders will follow suit, a move that follows in the wake of the probe into the loss of billions of shillings at state agencies.

At the Mombasa event, Raila further maintained that Kenya will have a referendum to usher in amendments to the Constitution, "​if the 14-member committee on Building Bridges suggests so."

"It will be done whether one likes or not," he said, a statement that goes against Ruto's position that "no referendum will be held to give few people jobs".

But Raila said opponents of changes to the law are not honest adding that the recommendation has not been made yet.

The former Prime Minister said he will not engage in politics as the time is not ripe, a remark coming at a time Ruto has been raiding his Coast backyard to endear himself to the locals.

"When the right moment comes, men will fight it out. So, stop the premature campaigns," Raila said.

Mombasa Governor Hassan Joho said he was the first politician to call for a lifestyle audit but mocked.

"We should create cluster for auditing politicians who are at different categories. From MPs to the President, international auditors either from London should be involved," he said.

Joho also said he should not be underrated as he will pull a surprise come 2022. He has declared his presidential bid.

"In all elections, I have made history. I'm the first Mombasa Governor. I was the only MP who had most number of votes. If you doubted my ability, watch this space. You'll be shocked," the governor said.