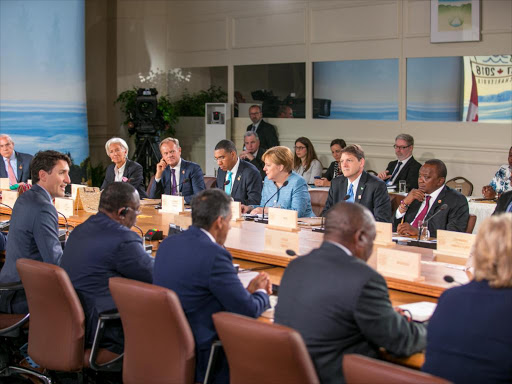 President Uhuru Kenyatta has called on the G7 nations to support the protection of oceans and seas by partnering with Kenya in hosting the first ever high-level conference on the Blue Economy in November.

The President persuaded the G7 leaders to embrace the protection of oceans and seas as a shared responsibility.

“Your political will and decisive action are vital to driving this agenda. Global partnerships on a win-win basis are necessary in tackling the capacity gaps the most afflicted countries face,” the President said.

He spoke on Saturday when he addressed the outreach session of the G7 Summit in Quebec under the theme "Healthy, Productive and Resilient Oceans and Seas, Coasts and Communities".

President Kenyatta pointed out that Kenya’s marine logistics and fisheries sector could add billions of dollars to the national economy if its potential was fully harnessed.

To address the threat posed by plastic bags, President Kenyatta informed the summit that his administration banned the manufacture, sale or use of plastic carrier bags.

With Rwanda and Kenya already implementing the East African Community Bill banning plastics, the Kenyan Head of State said it was time for a comprehensive global approach to rethinking plastic chemistry and design, recycling strategies and consumer use.

"The G7 should recognize and speak with a strong voice against the vice of plastics and its adverse effects on environmental pollution and climate change," the President said.

"We also seek support for African countries to build our capacity to prevent disasters and if they do happen, solidify our management and ability to recover," he added.

He also spoke against the illegal, unreported and unregulated fishing.

“The Western Indian Ocean comprising Comoros, Kenya, Madagascar, Mauritius, Mozambique, Seychelles, Somalia and Tanzania has rich marine resources that attract about 500 commercial fishing vessels from around the world, mainly to catch tuna for consumption in the West. However, one of every five fish are caught illegally,” President Uhuru said.

The Head of State also urged the seven world’s most industrialized nations to partner with Africa to strengthen maritime surveillance and response capabilities.

This, he said, would reduce unsecured and ungoverned spaces in which criminals, insurgents and terrorists can operate with impunity.

Given the trans-boundary nature of oceans, President Kenyatta said international mechanisms for negotiation and collaboration are critical to ensuring their sustainable management.

“That is why tech advancement to drive environmentally sound economies, and funding for a global oceans system and partnership, are also paramount.”

applauded Prime Minister Trudeau for making the health, productivity and resilience of oceans central to the G7 platform this year.

The Canadian Prime Minister will co-sponsor Kenya’s inaugural Oceans Summit to be held in November.

“This is a global issue. Oceans are a defining issue given their unique and pervasive impact on human existence. However, without corrective action, they could easily become the tragedy of the 21st century,” President Kenyatta said.

Among the global leaders who endorsed President Kenyatta’s blue economy agenda at the G7 include Jamaica’s Prime Minister Andrew Holness who pledged to send a big delegation to the blue economy summit in Kenya in November.