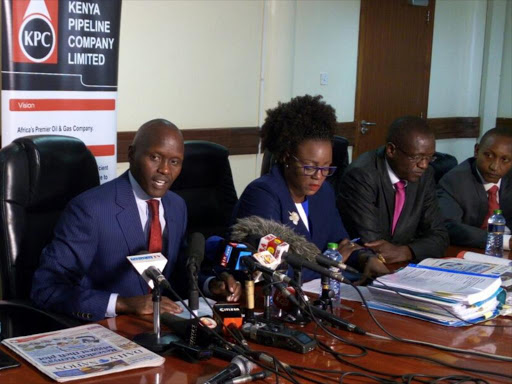 Kenya Pipeline managing director Joe Sang with other officials address the press at the company's offices in Nairobi on Tuesday, June 5, 2018. /SAM KISIKA

The KPC boss, however, confirmed that three senior staff have been sent on compulsory leave pending ongoing investigations by the Ethics and Anti-Corruption Commission.

He said all the 12 projects by KPC were above board as set out in the State Corporation Act, the Public Finance Management Act, as well as the Public Procurement and Disposal Act, 2015 among other relevant laws.

"The performance we did last year was a profit before tax of Sh11.5 billion. That is not a company that has swindled Sh95 billion," Sang said, adding that they are open for investigations.

According to Sang, the tender was advertised as "international competitive tender" on January 16

He said the tender was won by a Lebanese firm called Sakim International after a total of 13 firms were shortlisted to proceed to the final stage of the tendering process.

"For us to lose Sh95 billion, it means we would be out of business," he added.

He denied claims Sakim company has so far been paid Sh18.9 billion for contract extension.

He said the contractor asked for Sh18.9 billion but the sum was scaled down to Sh4.4 billion after evaluation of the work done.

Sang said KPC has already informed Energy CS Charles Keter about the contract extension charges and is awaiting feedback on the how to proceed with the payments.

"No extension of time claim has been paid to this company and we are ready to provide you with documents," Sang said.

"And I would like to confirm that we have not paid a single coin of tax payers’ money in extension time claim."

Sang said the agency has covered 217km of the Mombasa-Nairobi pipeline, which is being replaced. "The remaining 233km will be completed in the next four weeks."

Post a comment
WATCH: The latest videos from the Star
by EMMANUEL WANJALA @ItsWanjala
News
05 June 2018 - 12:00
Read The E-Paper