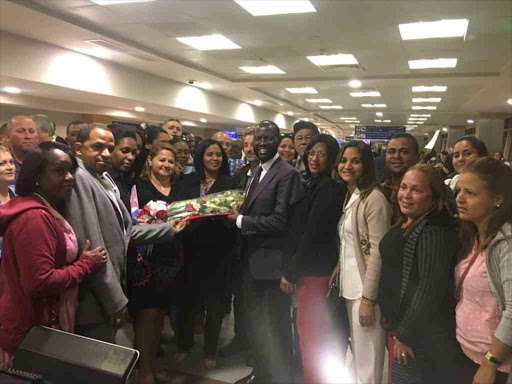 Kisumu Governor Anyang' Nyong'o and other government officials receive the first 50 Cuban doctors at the JKIA in Nairobi, June 5, 2018. /COG

The first 50 Cuban doctors have landed in Kenya.

They were received at the JKIA in Nairobi on Tuesday night by Kisumu Governor Anyang' Nyong'o, Health CAS Rashid Aman, Cuban Ambasador to Kenya Raul Rodri­guez and officials of the Health ministry and the Council of Governors.

The remaining 50 doctors will arrive on Thursday.

Via Twitter, the COG noted that "Kenya is eager and willing to learn from Cuba, which has managed to eradicate malaria and improve health indicators with infant mortality currently standing at 4.1 per 1000 live births."

The specialists will undergo a two-week induction from June 8 ahead of their deployment to all counties.

Kisumu Governor Anyang' Nyong'o and other government officials receive the first 50 Cuban doctors at the JKIA in Nairobi, June 5, 2018. /COG

The agreement between the two countries covers areas including the secondment of specialists and then technical experts to operate equipment.

Kenya will also work with Cuba on collaborative research projects, develop training for primary healthcare workers and partner to build the capacity to undertake genetic engineering and biotechnology.

The agreement also covers the two countries’ participation in research and advanced trials of medicines in areas where Kenya is vulnerable: using therapeutic anti-HIV and anti-prostate cancer vaccines; using vaccines to control influenza and meningitis; and controlling of diabetic foot ulcer amputation. It also covers the vector control in the fight against malaria.

Early in May, however, the doctors union threatened a mass withdrawal of its members over the government’s move to import the Cubans.

The more than 7,000 doctors alleged that the cost of importing and catering for the doctors amounted to at least Sh2 billion.