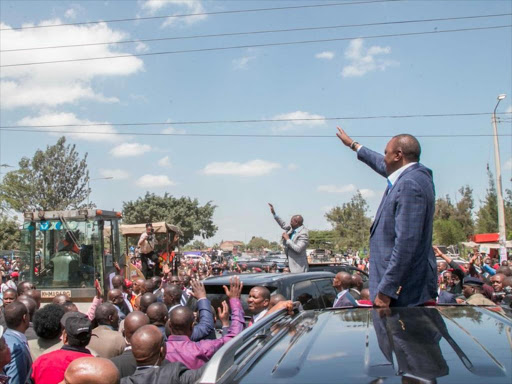 President Uhuru Kenyatta and his deputy William Ruto addressing a crowd in Eastlands area on May 30./PSCU

The President said this was just the beginning of the important exercise and will soon issue more titles for landowners in Nairobi County.

The Head of State said the 50,000 titles issued at the Jacaranda Grounds in Embakasi East will unlock the upwards of Sh 20 billion through business and investment.

The President at the same time gave the Ministry of Lands, the County Government and other relevant agencies three months to sort the controversies engulfing the Embakasi Ranching Scheme so that its members can get their title deeds.

The President said some investors in the City lived in fear because they had put up buildings on parcels of land without title deeds. He said time had come for every Kenyan to get his/her right.

“For those to whom we have issued with titles today will know Nairobi is also theirs,” he said.

The President said for many years, Nairobi had been forgotten over the issuance of the land documents adding the last title deed in Nairobi was issued many years back.

President Uhuru said the titles issued to Nairobi residents will make a huge difference to the beneficiaries.

Lands Cabinet Secretary Farida Karoney said her ministry targets to upscale the issuance of the titles to Nairobi people to 100,000 by the end of the year.

The Government now targets to issue a further 1 million titles within the next five years.

Before the Jubilee Government came to power in 2013, no more than 6 million titles had been issued across the country in 50 years.

President Uhuru also announced the allocation of Sh 4 billion to rehabilitate and construct all roads in Eastlands area.

He said this must be done before any other roads are considered in Nairobi and asked city residents to keep a watchful eye on contractors doing shoddy jobs.

The President said Sh 3.2 billion had previously been allocated to the same roads but the work was never done.