Sanity or another showdown? What to expect with Miguna's return 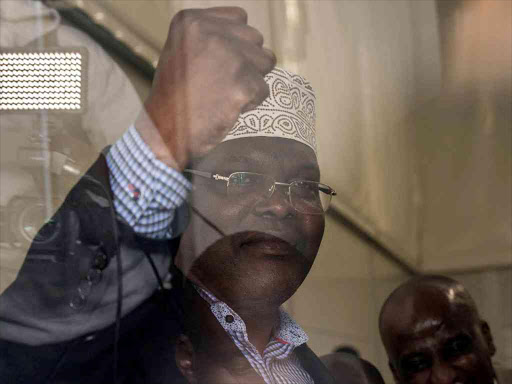 Miguna Miguna, a lawyer of dual Kenyan and Canadian citizenship, is seen through a glass door at the JKIA in Nairobi after being detained by policeMarch 26, 2018. /REUTERS

Kenyans can't help but wonder whether Miguna Miguna will once again get to the point of yelling "I'm not boarding" should he actually return on Wednesday.

Detention, torn clothes and no shoes, shouting matches, insults and heavy security could be the order of the day yet again.

Miguna has had it rough since he stamped documents for Nasa principal Raila Odinga's swearing-in as the People's President on January 30.

He was first deported on February 6 and then again on March 28.

The lawyer and General of the National Resistance Movement was forced to leave for Canada in March after he was allegedly sedated. His hands were swollen and he claimed he was forced to stay in a washroom at the JKIA for two days.

vehemently refused to renew his passport or even apply for a fresh Visa on entry but assures he will return.

Is Miguna ready for another showdown with the government?

His supporters believe he is and they want him back, but what would his next step be?

The government told the lawyer not to expect any special treatment when he lands so will a solution ever be found?

Government Spokesman Eric Kiraithe said Miguna will have to comply with all travel requirements but some are of the opinion that Raila is the 'help from above' that the General needs, especially considering the handshake with President Uhuru Kenyatta.

But Miguna has reaped through Raila, on several occasions, as he is opposed to friendliness with the ruling Jubilee Party

dismissed Raila's apparent political moves, including his meeting with the Gema Business Community, as

Miguna gave his view via Twitter after one 'Official JM Crick' said Raila was "destroying the enemies by befriending them".

In addition, the ODM leader will not be in the country for the possible intrigues of Miguna's return - he left for the UK on Sunday night and will jet back at the weekend.

The last time Raila tried to help Miguna, however, things did not go well as he could not secure his release. He once watched helplessly as police officers dragged the lawyer away.

In a letter dated May 5, KNCHR chairperson Kagwiria Mbogori asked Kihalangwa to comply with the court directive on this.

This includes issuing him with a valid Kenyan passport, purchasing a flight ticket for him and facilitating the commission's entry to the custom's clearance area at the Jomo Kenyatta International Airport.

Miguna is banking on the strength of 13 court orders directing the government to facilitate his return into the country.

To end the drama and save Kenya from international shame, however, some think the government should back down or that the General should adhere to requirements so he can have a chance to fight for his cause while actually in the country.