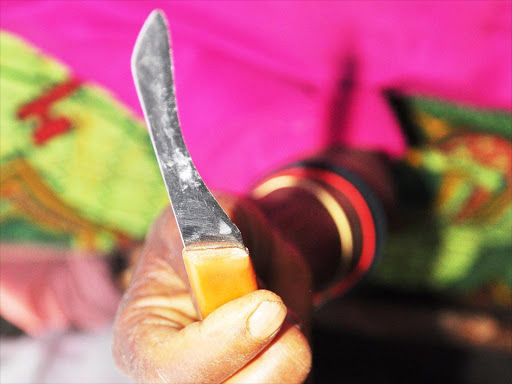 A file photo of a knife used during circumcision ceremonies for women among the Saboat in Mt Elgon. /GODFREY KIMONO

The fight against FGM got a major boost at the weekend following the launch of a new foundation that aims to promote the campaign.

Diamond Property Merchants launched a foundation whose anti-FGM campaign will focus on livelihoods for women, social protection, girl child education, among others.

During the launch at the Safari Park Hotel, the property investment wing gave out Sh200 million as seed capital to help the drive.

He said the foundation will help the target communities foster crop production through irrigated and greenhouse technology with a view of giving a means of survival.

"Special focus will be given to horticulture (vegetables and fruits) for both local and international market," he said.

"The produce will be marketed to local chain stores and for export market, target being EU and Middle East."

Managing director John Ngugi said the entity has in the recent past helped several people in technology transfer, especially in agriculture.

He lauded the move saying it has ensured that the beneficiaries are self-reliant hence reduce dependencies.

"We have reached over 600 people before. We have now opened the foundation because we realised that the budget we had could be exhausted quickly."

"The foundation will mobilise more resources to ensure that we reach as many people as possible," Ngugi said.

The foundation will also train the target communities to utilise various programs aimed at transforming agricultural resources into commercial resources.

He said the programmes have also taken root in Kikuyu where people were given tissue culture bananas from which they are now reaping fruits.

The Diamond Property Merchants Foundation has since been registered as an NGO by NGOs Coordination Board.