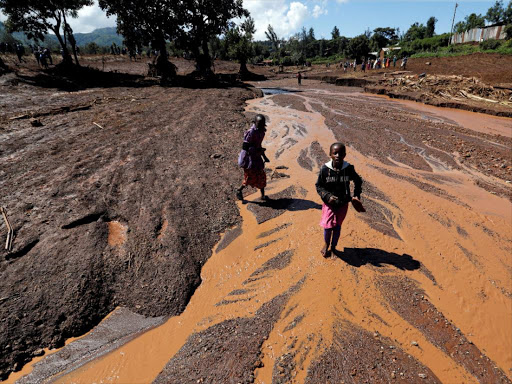 Horrified children flee to safety after the Solai dam burst on May 10, 2018. /REUTERS

Over 40 people were swept to their deaths yesterday and many more were missing after a dam burst its walls in the Solai area of Nakuru following heavy rains.

The Patel Dam, located on private farmland and used for irrigation and fish farming, broke its one-kilometer-long wall and swept hundreds of homes downstream.

The extent of the damage was yet to be ascertained by press time and rescue and relief efforts were underway. Government officials, however, projected that the death toll could rise to more than 100.

They include children and women trapped in mud and others whose whereabouts could not be established.

The mega dam on the farm of prominent farmer Mansukul Patel in Solai, Kabazi ward, collapsed and sent water surging across densely populated villages, destroying homes and buildings along the way.

At Marigu B village, the water found its way through a fault and emerged some seven kilometres away at Murrum trading centre, causing panic among residents.

Located on the upper part of the farm, the dam is eight kilometres from Solai Centre and one of four water reservoirs owned by Patel.

"We want the dams demolished, one is now leaking and is the largest covering almost four acres," Solai resident Stephen Ngugi said.

Scattered helmets, utensils, clothes and fish from the dam is all that could be seen in what was left of the villages.

Villagers were spotted in small groups talking in low tones about the tragedy that had befallen them.

A primary school was destroyed and the neighboring Solai Secondary School flooded. It was later ordered closed by the ministry.

It is estimated that more than 2,000 people were rendered homeless within a three-kilometre radius. Approximately 450 houses are said to have been destroyed, stretching up to the expansive Nyakinyua farm, which borders the dam's water reservoir.

"It was a sea of water. My neighbor was killed when the water smashed through the wall of his house. He was blind so he could not run. They found his body in the morning," Monica Njeri said at Nakuru War Memorial Hospital were she was being treated. "My other neighbours also died. All our houses have been ruined."

Bodies, mostly of women and children, covered with mud were retrieved at a coffee plantation and in nearby bushes. It seemed that they had been fleeing, but "could not make it due to the force and speed of the water from the flooded dam," Nakuru county police chief Gideon Kibunjah said.

Former former Subukia MP Koigi wa Wamwere yesterday recalled how he fought but lost the battle against the construction of the dam, when he represented the area from 1979-1982.

"He [the owner] was blocking water from reaching neighbours downstream and people from passing through his [Patel's] farm, although they had no alternatives," he told the Star yesterday.

Koigi said that although they have been inconvenienced by the dams, residents were grateful to the the farmer because of the benefits to them from his community service.

The view was shared by former Kenya Civil Aviation Authority boss Chris Kuto, a neighbour, who called Patel "a very responsible person". He said the tragedy could not have been the result of negligence.

"We have had enormous rain. Even my farm was almost washed away last weekend," Kuto said. "I have lived here for years and I can only compare the current rain to what happened in 1961. It filled up to the hills."

The area, formerly known as the White Valleys of Subukia, was popular with White settlers in the colonial era.

Patel, one of the few non-whites, is reported to have acquired more land from departing white settlers to establish the expansive conservancy and farming enterprise it is today.

Until the Patel Dam tragedy, weeks of torrential rain had

caused flooding and mudslides across the country.

Government statistics released Wednesday showed that more than 220,000 people have been displaced by flooding as heavy rains hit the country — after three consecutive failed rainy seasons had left it in drought.

The area has seven dams used by a commercial farm, said Keffa Mageni, an official with an advocacy group that helps

resettle displaced people. With the heavy seasonal rain, the dams do not have an outlet, he said.

Interior Cabinet Secretary Fred Matiang'i visited the scene and said the government had launched investigations to determine the stability of six other dams.

A multi-agency unit was formed to try and retrieve the bodies of the dead, as many people were reported missing.

Mary Kariuki, 36, said she was cooking for her three children when water smashed into her house.

"As we were talking while cooking, I heard the noise of water flowing and was initially happy that

the rain was good for our crops. But just when I served, we found ourselves marooned by water," she said.

She grabbed her two children and ran across the road, only to realise that the other two had been left behind. They both died.

"It's so painful. I have sacrificed to raise my kids, now look what has happened to them. I cannot take it anymore," she said.

Peter Kamau was ferrying a passenger on his motorbike when he saw the water from the hill coming down so fast and sweeping away people and houses.

"I could not comprehend. I thought it was floods from the heavy rains. I ran for

dear life leaving the motorbike behind. I went went back in the morning to look for it but couldn’t find it. All I found were bodies of people I knew very well," Kamau, who stays in Kabazi village, said.

They were joined by search and rescue teams from Nakuru and Baringo counties, emergency workers, soldiers, police and volunteers to search for survivors, clear debris and restore power and telephone communications.

Residents feared that more bodies could have been trapped inside deep dreaded holes of fault lines.