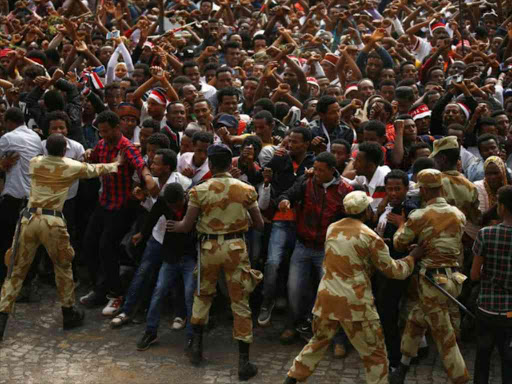 Ethiopia's Prime Minister Abiy Ahmed should fulfil his pledge to expand political freedoms by lifting a state of emergency, said a journalist released in February after six years in jail.

Eskinder Nega was arrested in 2011 and convicted under anti-terrorism laws for articles criticising what he called politically motivated prosecutions at a time of a broader campaign for democratic freedoms in the country of 100 million.

He was pardoned one day before Prime Minister Hailemariam Desalegn resigned on February 15, saying he wanted to clear the way for reform. The government imposed the emergency the next day, saying it wanted to stem anti-government protests.

The choice of Abiy, 41, as premier by the coalition that has ruled Ethiopia since 1991 has raised expectations of greater freedom but Eskinder said he will be judged by his actions.

"He's saying the right things. He has to walk the talk and he hasn't. He should have lifted the state of emergency by now," Nega told Reuters TV in

where he travelled after his release from a prison outside the capital Addis Ababa.

"We were released not because the government wanted to release us but because the people demand it and there was the threat of imminent violence. They had imprisoned us under false charges," he said.

Speaking of his time in jail, he said: "The aim was not only to imprison you physically, but to break your spirit." Government officials were not immediately available for comment.

Security forces killed hundreds of people who campaigned for democratic freedoms between 2015 and 2017 and more than 26,000 were arrested over the same period, though most were released having spent a few weeks in detention.

The government has this year released thousands of prisoners including dissidents and journalists in a bid to calm discontent.

Eskinder said he would soon return to Ethiopia to resume his work as a journalist and continue a struggle for democracy.

"Our three decades of experience in Ethiopia in trying to have an independent press have showed us that you can't have a free press without first having democracy."

Ethiopia is often accused of using security concerns as a pretext to stifle dissent and media freedoms.

The government's critics say it has jailed journalists under an anti-terrorism law that says anyone caught publishing information that could incite readers to commit acts of terrorism can be jailed for between 10 to 20 years.

Since being sworn in a month ago, Abiy has met opposition politicians and travelled to parts of the country that were hotbeds of dissent against the previous administration.

"Democracy cannot be realised in the absence of rights, be it civil or economic rights. We all need to have a platform to voice our concerns," he said in a speech to parliament upon taking office.