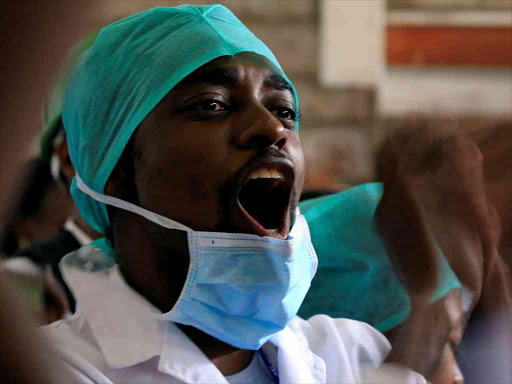 A Kenyan doctor shouts during a demonstration to press for better salaries in Nairobi, December 5, 2016. /REUTERS

Cardiologists, Orthopaedic surgeons, Plastic reconstruction surgeons and Nephrologist are among the 100 doctors Kenya is importing from Cuba.

The Health ministry, in a statement on Wednesday, said the doctors will bridge the country's gap in specialised service provision.

There are also three Urologists, one Neurosurgeon, two Endocrinologists and 53 Family Physicians, of whom the first batch will arrive in July.

Health CS Sicily Kariuki said the selection criteria was based on "critical service gaps, improvement of access and equity".

She said the optimisation of government programmes such as the Managed Equipment Services was also among reasons the government opted for the experts.

"They will reduce the preventable disease burden so that other specialists can focus on curative and rehabilitative health services as required," Kariuki said.

The notice came just a day after the Kenya Medical Practitioners and Dentists Union threatened to call for mass withdrawals from the medical workers roll once the doctors arrive.

KMPDU Secretary General Ouma Oluga argued that the employment of the Cuban doctors was done before 2,000 local doctors were considered for employment.

He said the Sh2 billion to be used to hire the Cuban specialists is enough to hire 1,000 local doctors per year.

All the Cuban doctors will be vetted by the Kenya Medical Practitioners and Dentists Board to establish their suitability.

The board will then send its recommendations to the Public Service Commission.

Once registered and deployed, their practice will be governed by rules and regulations set by the board.

Currently, there are 2,204 active Medical Specialists from the 2,711 that are registered by the KMPDB to serve a population of over 40 million Kenyans.

"The government has continually posted doctors across the country on a needs basis. However, most doctors that have been posted to hardship regions seek transfers to urban areas with others resigning from the public health sector altogether," Kariuki said.

Kenya has deficit of 40,332 doctors in view of the World Health Organisation's recommended 1:1000 doctor-patient ratio.

"The Cuban specialists are, therefore, a first step in bridging the doctor to population ratio in our country," Kariuki said.

In the exchange programme, one Kenyan doctor per county will be trained in Cuba in Family Medicine.

"The bilateral agreements with Cuba do not in any manner negate the need to train more of our own professionals and ensure they are deployed appropriately," Kariuki said.

The government has touted the importation of the Cuban doctors as one of the components geared towards rolling out universal health care in line with the Big 4 Agenda.