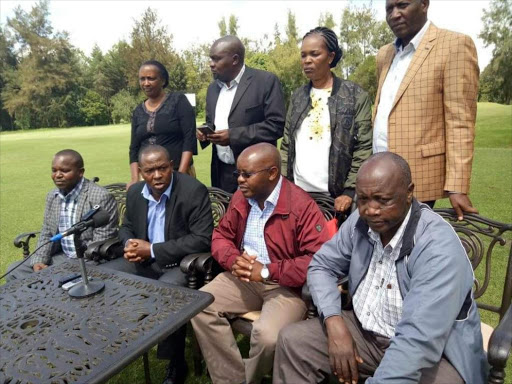 Laikipia leaders on Saturday asked the government to step in and end bandit attacks in the region following Thursday's killings of two county officials.

They were waylaid by bandits who sprayed bullets on their vehicles, an incident which left Nyahururu ward administrator Ikinya Matindi with critical injuries.

Governor Nderitu Muriithi and Laikipia West MP Patrick Mariru condoled with the families of the victims of the attack.

Muriithi said the killing is regrettable and unacceptable adding that the Laikipia leadership will stand with and support the police on any action they take.

"We stand with police and want them to take strict measures as allowable in law because we cannot have bandits killing even government officers doing their job."

He said they are speaking for the entire leadership of Laikipia, Baringo, Samburu and Isiolo counties "who have also said there can be no room for bandits".

Muriithi said it is regrettable that while leaders are putting efforts to bring development and improve livestock production, other fellows have continued with archaic tradition of killing and stealing livestock from others.

He said the cooperation among the affected counties will continue despite the unfortunate Thursday incident.

Muriithi said Laikipia leadership will seek audience with Interior CS Fred Matiang’i to discuss a lasting solution on banditry attacks in the region.

Our expectation at the moment, he said, is that police will get the bandits involved in the Thursday attack and take them to court.

Mariru said leaders from the neighbouring regions must also take full responsibility "because people cannot be allowed to continue being killed every other day".

He said the police should wipe out the attackers from their "holding ground and launching pad", being the unattended to conservancies.

The government, he said, must do all within its powers to flash out the bandits from the conservancies where the bandits take refuge after executing attacks.

She said his demise is disturbing at a time when the forest department is busy planting trees and providing leadership in tree planting at national and county levels.

"The officer had gone to provide leadership in assessment of the forest at Laikipia Nature Conservancy where the owner wanted to harvest trees for sale," she said

She said Wambugu was a hard-working and dedicated officer who has been one of the heroes in the service.