Plot to cut off EACC powers to probe graft 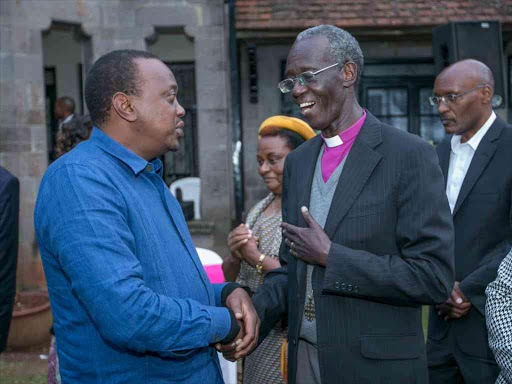 President Uhuru Kenyatta with retired Archbishop of the Anglican Church of Kenya Eliud Wabukala during his 65th Birthday celebration and farewell party at the church Bishopsbourne residence, Nairobi.

A mischievous plot is afoot to cripple the Ethics and Anti-Corruption Commission through a crucial amendment that would render its investigations useless.

An inconspicuous amendment contained in the Statute Law (Miscellaneous Amendments) Bill, 2018, tabled in the National Assembly by Majority leader Aden Duale last week seeks to strike off the EACC from the list of investigative agencies that the Office of the Director of Public Prosecutions (ODPP) would direct to carry out his work.

The proposal has elicited mixed reactions amongst key stakeholders who expressed concern that the amendment would render the anti-graft agency toothless as its investigations would have no end-user.

But in what could provide a window into the intrigues in the war against corruption, the Commission feigned ignorance of the move, although other sources said it could have been the result of collusion from within.

The previous DPP blamed the investigative arms for shoddy work that could not stand the test of prosecution, while the EACC and the Directorate of Criminal Investigations blamed the DPP’s office of under performance. The latter often returned files to the investigating agencies because they could not meet prosecution standards.

The amendment to Section 2(1) of the ODPP Act deletes the Ethics and Anti-Corruption Commission from the list of agencies that the DPP may direct to carry out investigations.

Part I of the ODPP Act targeted for amendment states: “Investigative Agency” in relation to public prosecutions means "the National Police Service, Ethics and Anti-Corruption Commission, Kenya National Commission on Human Rights, Commission on Administration of Justice, Kenya Revenue Authority, Anti-Counterfeit Agency or any other Government entity mandated with criminal investigation role under any written law.”

Part II, 5 (2) states that the Director shall exercise State powers of prosecution and may —

(a) notwithstanding the provisions of any other law in force for the time being, perform all that is necessary to be done for the purpose of performing the functions of the Director; and

(b) direct that investigations be conducted by an investigative agency named in the direction.

(3) Without prejudice to other provisions of this Act or any other law in force, the Director may assign an officer subordinate to him to assist or guide in the investigation of a crime and every investigative Agency shall give effect to that direction.

Interestingly, the memorandum of objects of the amendments in the Statute Amendment Bill (omnibus bill) does not have an explanation for the proposed amendment and what it is to achieve, raising questions as to where and when the amendment was introduced and by whom.

Despite proposing the deletion, the

Bill does not give the EACC power to institute criminal proceedings against graft suspects, leaving questions about the motive of stripping the agency of the crucial link to the prosecutorial arm of the state.

The amendment has the effect of disconnecting the Director of Public Prosecutions from the work of the EACC, which he would not be mandated to direct. Yet the EACC has no power to prosecute suspects of its own investigations.

It means the DPP would not use the investigation done by the EACC or order it to probe any matter in the exercise of his power under Article 157 of the Constitution.

“That’s very strange. It has never come to our commission meetings,” he told the Star from Kakamega. He said he would seek guidance from his legal team.

However, EACC chief executive Halake Waqo said there was nothing wrong with the proposed amendment.

“It does not affect our work and I have no problem with it,” he said.

Its removal from the list of investigative agencies is widely viewed as an attempt by the Jubilee administration — or factions within it — to cripple graft investigations by clipping the EACC and DPP's powers.

The EACC is only mandated by law to investigate graft and recommend cases for prosecution to the DPP. It is also charged with working with other state institutions in promoting standards and best practices of integrity and anti-corruption policies.

“I have not seen that amendment but we will look at it and make a decision,” said William Cheptumo, chairman of the Justice and Legal Affairs Committee of the National Assembly.

Attorney General Paul Kihara had not responded to enquiries by the Star by press time.

But Law Society of Kenya chief executive Mercy Wambua said that without amending Section 11 of the EACC Act, which deals with the functions of the agency, the proposed amendment becomes untenable.

“It leaves section 11 (d) of the EACC Act intact, therefore the proposed amendment will be in conflict with the EACC Act, specifically on the functions of the EACC. It is creating more trouble than solutions. They need to forestall that process by deleting that amendment because it will place both institutions in conflict,” Wambua said.

Lawyer and the society’s former CEO Apollo Mboya said the deletion will clip the DPP's powers, but held that the impact will spill over to the EACC as well.

Mboya threatened to challenge the amendments should they be passed into law, arguing that they will curtail the fight against graft.

“The import of this amendment is to curtail the powers of the DPP because the DPP can no longer direct the EACC to do investigations. I will go to court myself because it's the merchants of corruption that are spearheading these changes,” Mboya said.

Constitutional lawyer Waikwa Wanyoike told the Star that the move could be a ploy to take away the EACC's powers.

Heinsists, however, that the anti-graft watchdog is protected by the Constitution and can still recommend cases for prosecution, or opt for private prosecution if the DPP declines to prefer charges against suspects on account of the deletion.

Wanyoike, whose Katiba Institute has filed many public interest cases in the courts, said, however, the deletion would hamper the DPP in probing graft cases.

"My fear is that maybe someone was thinking of reducing the EACC's power further but that may not be possible because they derive their power from Section 79 of the Constitution. It (the deletion) lowers the DPP's power, not the EACC. If the DPP refuses to prosecute cases brought to him by the EACC on account of the deletion, that would be a misinterpretation of the law,” Waikwa said.

“It is a curious amendment. I am not a lawyer but obviously this seems to be a castration of an already feeble EACC,” he told the Star.

The war on corruption has been criticised as ineffective. The closest it came to an iota of success was in March 2015 when President Uhuru, in an address to the nation, tabled a list of 175 public officers allegedly under investigation, the so-called List of Shame.

Subsequently, 12 state officials, among them four Cabinet Secretaries, were suspended. Most of the officials were eventually absolved of any wrongdoing and others had their charges dropped. Many of those implicated now serve in elective or appointive public offices.