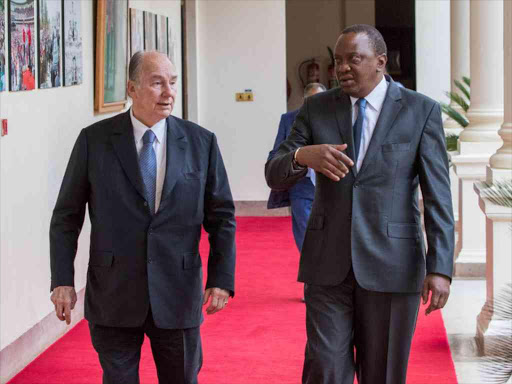 The Aga Khan with President Uhuru Kenyatta during their meeting at State House in Nairobi, April 13, 2018. /PSCU

The President and The Aga Khan discussed investment opportunities in their meeting at State House in Nairobi on Friday.

The Aga Khan is the

He and President Uhuru Kenyatta discussed opportunities for the Aga Khan Development Network (AKDN) in the media, economy, tourism, culture, health and education.

The two also discussed the government’s Big Four priorities and their shared objectives in the areas of healthcare,

"They agreed that the AKDN will continue to contribute to the current national development priorities," State House Spokesman Manoah Esipisu said in a statement.

Ismaili community continues to be a part of Kenyan history through investments and development projects that have taken place for 100 years.

Under the leadership of the Agha Khan, a number of institutions have been established and have made significant contributions to Kenya's achievements locally and abroad.

to strengthening Kenya’s higher education system through efforts including major investments in the expansion of Aga Khan University's campus in Nairobi.

The two also talked about the quality of life in Nairobi and said they will increase green spaces.

Efforts for this include

a project to restore City Park to its original state as the 'Green Jewel of Nairobi'.

and will leave Saturday.

The two leaders expressed satisfaction with the achievements of the visit and agreed to work on the modalities for concluding outstanding issues.

congratulated the Aga Khan on the Diamond Jubilee

celebration and wished him and the Ismailia community the best.