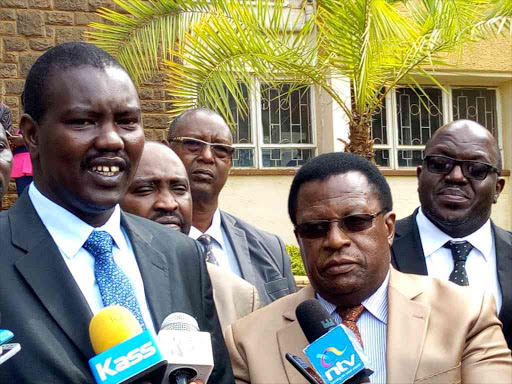 The NPSC has announced the removal of hundreds of traffic police officers from the service as they failed their vetting.

Johnston Kavuludi, chairman of the National Police Service Commission, said the officers did not pass the

“We finished decision-making on Thursday last week. Those to be removed and retained have been informed," he told reporters in Eldoret on Monday after paying Uasin Gishu Governor Jackson Mandago a courtesy call.

"Their suitability was determined through a rigorous process."

Kavuludi noted the traffic department's removal rate was the highest in the service.

“It’s because it s most affected by graft," he said, adding most of the officers could not explain the sources of their wealth and the amounts of money in their accounts.

“Either they gave explanations which did not add up or we found out details they had not revealed after investigating."

will be will be retired for the sake of the public.

They will be paid part of their dues.

Kavuludi further reported that some officers tried avoiding the vetting

by moving from the traffic department but that the NPSC will catch up with them.

“They should know no officer will be promoted or given retirement benefits without producing a vetting clearance certificate," he said, noting the process improves performance.

Regarding the "serious matter" of officers' welfare, he said the government had allocated adequate resources.

"We only ask them to be patient as the process that will take time goes on," he said.

Kavuludi met Mandago before commencing the vetting of Chief Inspectors in the region, an exercise that will take 12 days.

The commission has formed several groups, with the chairman leading those in Uasin Gishu and Trans Nzoia.