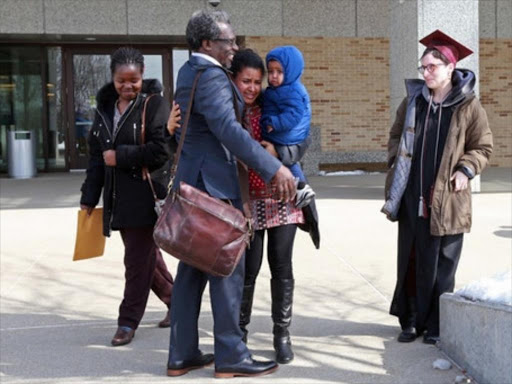 A Kenyan professor in the United States is facing deportation months after President Donald Trump announced his vision for 'merit-based' immigration reforms.

a Kenyan-born graduate of the University of Minnesota, attended a meeting at the ICE office in St Paul on Friday, where "plans for his removal" were discussed.

The Augsburg University lecturer, who

was not given any reasons for his deportation.

reported that Wanyama received a letter asking him to report with his wife ahead of his scheduled appointment to discuss plans for his departure in March.

"Well, what can I do? If they want me to buy my own ticket, I will do that," the professor, who has been in the US for 26 years, told the

Wanyama, 60, said he will explore options to stay and is heartened by the support after years of reticence about his immigration woes.

The lecturer had applied for asylum saying he feared persecution because of a 2004 newspaper article critical of then-Kenyan President Mwai Kibaki.

Wanyama wrote an article in

his family members about his whereabouts.

After the stories were published, he alleged that the Kenyan government intensified its focus on him as a political opponent.

asylum application was officially declined in 2012 and he was marked for possible removal.

At that time, he was ordered to check in with the ICE every on to three months.

Wanyama and his wife Mary, who is a registered nurse, had appeared for regular check-ins with ICE officials.

Wanyama left Kenya when the country was experiencing

ethnic violence in which thousands died and hundreds displaced.

He was followed by Mary and children

Two of his sons are recipients of Deferred Action for Childhood Arrivals,

Their other child was born in the United States so he is a citizen.