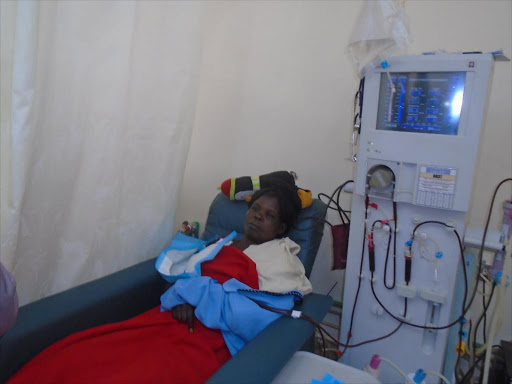 A patient on a dialysis machine. /FILE

Four merciless gunmen on Monday night stormed a Nairobi hospital, roughed up patients and workers and stole a dialysis machine.

They robbed them of cash, mobile phones and other valuables. The ordeal lasted about 45 minutes in John Lee Hospital in Jericho near Shauri Moyo slum. About 100 patients were said to be admitted at the time.

Yesterday, workers told the Star, one man ransacked wards and stole valuables. One man was stationed at the gate, and two patrolled outside the hospital. Staff were ordered into a room and locked up.

After the raid, the four men armed with pistols and swords casually walked away to the slum.

Details of how people were roughed up were not clear. Yesterday officers from Buru Buru police station interviewed horrified workers and patients. Some were too traumatised to speak.

The men were described as no older than 30 years. They arrived in pairs, just before 8pm on Monday.

Two men told security guards they needed treatment and were ushered into reception.

The two other men entered a few minutes after 8pm, saying they wanted to visit a patient.

They were stopped by security guards, who told them visiting hours were over. Then they drew pistols and forced their way in.

The two other robbers, who had taken up strategic positions in the wards, ordered health workers into a room and locked them up.

Brandishing guns, they warned they would not hesitate to shoot anybody who defied them.

“The hospital went quiet when thugs threatened to shoot. All patients gave up cash and phones,” a fearful patient said.

Buru Buru DCI chief Jeremiah Ikiao said officers have crucial leads that will lead to arrest of the gang.