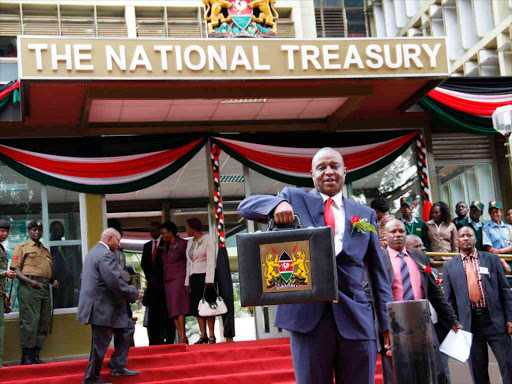 Treasury CS Henry Rotich walks out of Treasury building with a brief case in ahead of the reading of the 2015/16 budget on June 11, 2015. /Monicah Mwangi

Taxpayers lost more than Sh800 million during the 2015/2016 financial year, a report by the Auditor General shows. The auditor unearthed fraud as ministries failed to provide receipts to back their expenditure.

The report exposed a syndicate in which 2,213 computers for public secondary schools valued at Sh153.8 million cannot be accounted for.

The statement of receipts and payments for the year showed that the ministry bought 3,320 computers for public secondary schools at a cost of Sh230.7 million.

However, the list of the serialised computers showed only 1,107 computers, resulting in the variance.

The ministry is also on the spot over Sh31.3 million allegedly incurred on salaries for mobile school teachers and purchase of instructional materials for 117 mobile schools in Arid and Semi-Arid areas.

The ministry also failed to present supporting documents for the expenditure of Sh1.3 million paid to a firm for printing badges and booklets used during the National Ball Games for primary, secondary and special Needs schools. The ministry was then under Jacob Kaimenyi.

The department of water irregularly bought a luxurious vehicle for then CS Eugene Wamalwa against government regulations. The vehicle was bought at Sh7 million contrary to Sh2 million limit prescribed in a 2011 circular.

“In the circumstance, the State Department of Water irregularly spent Sh5million,”the report says.

The officers were getting salaries from both employers contrary to the Employment Act, which requires them to earn one salary at a time.

The ministry made an irregular payment of Sh34.8 million to the Kenya Yearbook Editorial Board as assistance to undertake activities. The Auditor General says the payment was contrary to the Public Finance Management Regulations. The rules bar a national government entity from giving cash donations to another national government agency.

The ICT ministry is also on the spot over Sh104.3 million used to buy vehicles against a budgetary provision of Sh91.2 million, resulting in over expenditure of Sh13.1 million.

The Auditor General has also found irregularities in the award of a contract for the partitioning and refurbishment work on 9th and 11th floors at TelePosta Towers at a cost of Sh12.7 million.

Taxpayers lost a total of Sh62.2 million in interest claims for delayed payments to two contractors at the Parliamentary Service Commission. Some Sh34.3million was paid to a local firm contracted to renovate the senate chambers and parliamentary offices while a further Sh27.8 million was paid to a foreign company that was constructing a multi-storey office block.

On September 5, 2012, the commission awarded the local company a Sh2.2 billion tender to renovate the senate chamber and parliamentary offices. The Sh5.8 billion tender for the office block construction was awarded on September 23, 2013.

“Had the contractors’ bills been settled on time, the total expenditure of Sh62,251,760 incurred on interest on delayed payments could have been avoided,” the report says.

“Taxpayers could lose money because of stalled refurbishment and partitioning of offices at Harambee Co-operative Plaza.”

The commission is on the spot over unexplained increase in expenditures amounting to Sh113.5 million.

The Auditor General says the commission did not provide any justification on the expenditure surge.

For instance, the Auditor General says, the commission increased its foreign travel and subsistence expenditures by Sh21.7 million, training expenses by Sh53.8 million, printing, advertising and supplies by Sh12.3 million and a further Sh24.6 million on other expenses.

At the same time, the report questions the payment of Sh49 million to JSC board members without supporting documents.

The Judiciary could not account for Sh8.1 million of deposits and bonds paid to the Kericho Law Court by suspects and convicts.

Examination of the deposit ledger and other court records indicated deposits and bonds paid to the court by convicts totaling Sh13.5 million had not been refunded as at 30 June 2015.

Further, an examination of bank statement for Deposit Account revealed a balance of Sh5.4 million as at the same date.

At Baricho Law Courts, the Judiciary lost Sh984,000 due to falsification of documents and fraud.