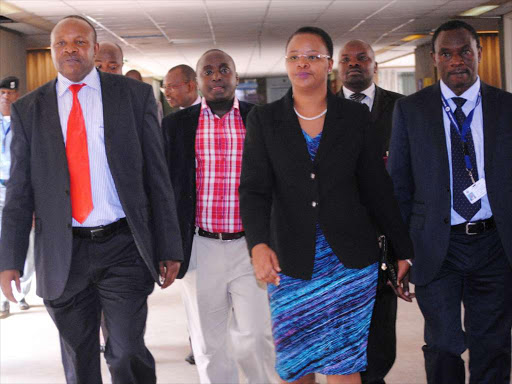 A section of Rift Valley MPs want immediate reinstatement of KNH CEO Lily Koross after she was sent on compulsory leave on Friday.

following the incident where doctors at the hospital performed a brain surgery on a wrong patient.

The MPs led by senator Aron Cheruyoit claim that the events that have been happening at the facility are a well-choreographed wider scheme to remove Koross.

embarked on schemes to taint her image.

"We all know that KNH is one of the implementing agents of president Uhuru Kenyatta's Big4. We are told Koross is one of the hardest nuts to crack who has made it difficult for cartels to operate at the facility. All these scandals we are seeing are aimed at spearheading her ouster," Cheruyoit said.

He said it is wrong for Health CS Sicily Kariuki to sent Koross on leave without giving her a chance to tell her story.

"I apologise for the patient mix-up at KNH, I have directed that KNH CEO be sent on compulsory leave until the probe is over," the Cabinet Secretary said.

The senator said such knee-jerk reaction will not solve the matter as it is just a cover-up for the masters who sit in government while funding cartels to cripple operations at the facility.

"We want to tell madam Kariuki that knee-jerk reactions are a sign of weakness, cluelessness, inept and incompetent leadership. She has barely settled into her new docket and she doesn't even understand what is happening yet she has the audacity to walk at KNH and command Koross to step aside?" he said.

According to Cheruyoit, What the CS could have done is to walk at the facility and seek an audience with the board which is in charge of operations at the facility.

"All we are reading is malice but we shall not allow it we demand an immediate reinstatement of Koros," Cheruyoit said.

The Senator said as a matter of fact Koros should be commended for having strived to run the biggest referral facility that is underfunded and understaffed yet she is crucified every time there are mishaps.

You cannot condemn someone unheard. CS Kariuki should tell us whether she working for Uhuru or the cartels. Let her declare her interests at the facility instead of victimizing innocent people, he said.