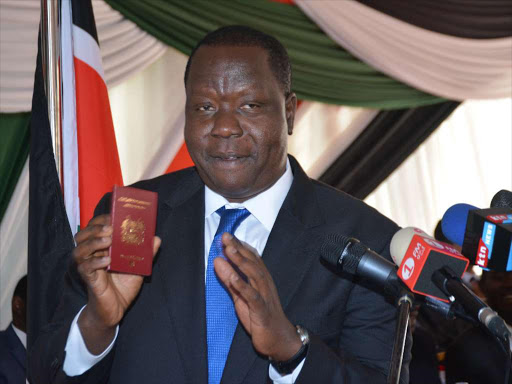 The government has introduced special fees on passports for Kenyans living abroad that would see them pay almost double the current amount.

The move is seen as punishment for Kenyans in the diaspora who were outraged by the dramatic deportation fiery lawyer Miguna Miguna to Canada early this month.

Under the new regulations, Kenyans living abroad have been classified into five broad categories with those living in the US and the Caribbean countries expected to pay the highest fees.

The five categories are Americas and the Caribbean, United Kingdom, Africa, Australia and Asia and the European Union.
According to the regulations signed by Interior Cabinet Secretary Fred Matiangi, Kenyans in the US and the Caribbean will pay Sh8,000 for a 32-page passport, Sh11,000 for a 48-page passport and Sh14,000 for a 64-page passport. Initially, the passports cost Sh4,500, Sh6,000 and Sh7,500 for a 32 page, 48 page and 64 page respectively.
Diplomatic passports will go up by almost Sh10,000 for those living in the US and the Caribbean countries.
From Sh7,500 initially, those who want to hold diplomatic passports will be expected to pay Sh17,000.
Similarly, those who have lost their passports or would like to renew their their mutilated documents will pay double after the fees were elevated from Sh10,000 to Sh20,000.