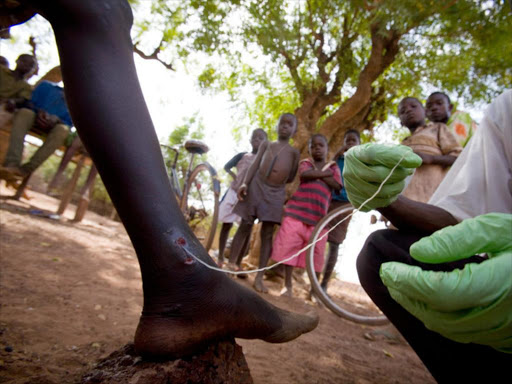 Kenya has officially been declared free of guinea worm disease.

This is after a team from World Health Organisation evaluating the status of the disease found no evidence of its transmission in the last three years.

WHO Director-General Tedros Adhanom signed the official certificate on Tuesday in Geneva, Switzerland.

Health CS Sicily Kariuki thanked all partners working with the ministry for making this a reality.

“We have it! WHO DG Tedros Adhamon signed the certificate. Kenya now declared Guinea Worm Disease Free. Congratulations to national and county governments and all partners who made this possible,” Kariuki tweeted.

The team presented its recommendations to the International Commission for the Certification of Dracunculiasis (Guinea Worm) Eradication (ICCDE).

Head of the Neglected Tropical Disease Unit Sultani Matendechero told The Star that despite this declaration, continuous surveillance of the disease has to be done.

“This means that we are now officially free and we will be reducing our focus to about sixteen other neglected tropical diseases. But this is a

The global health agency defines neglected tropical diseases or NTDs as a diverse group of communicable diseases that prevail in tropical and subtropical conditions in 149 countries.

Persons living in poverty, without adequate sanitation and in close contact with infectious vectors and domestic animals and livestock are among the worst affected.

Matendechero added that the certification means that the government can allocate more resources to the remaining neglected diseases that are affecting Kenyans.

Apart from guinea worms other NTDs that the unit is closely monitoring include; Intestinal worms, Chikungunya, Kalazar, dengue Fever, Bilharzia, trachoma, elephantiasis, leprosy, rabies, sleeping sickness, river blindness among others that are still common in some parts of the country.

Post a comment
WATCH: The latest videos from the Star
by RHODA ODHIAMBO @OdhiamboRhoda
News
21 February 2018 - 18:00
Read The E-Paper