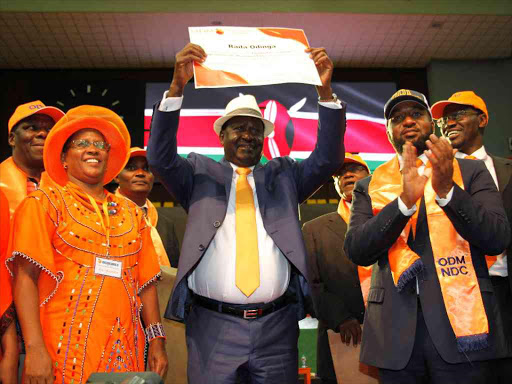 NASA coalition flag bearer Raila Odinga displays his party nomination certificate after he was endorsed as the ODM presidential candidate during the National Delegates Conference at Kasarani on May 5 last year. /JACK OWUOR

Opposition Chief Raila Odinga has kicked off an aggressive plan to revamp ODM as a formidable political machine amid vicious squabbles that threaten to tear apart the NASA coalition.

Raila's new game plan emerged just a day after a near- implosion of the Opposition coalition, with legislators from three affiliate parties openly telling Wiper leader Kalonzo Musyoka to shape up or ship out.

But the honeymoon may not last long for Musalia Mudavadi's ANC and Moses Wetang’ula's Ford Kenya as well.

Angry Raila allies are threatening to kick out the three affiliates from key parliamentary committee leadership positions, accusing them of riding on ODM's back with “insignificant political capital”.

“We no longer care. These guys have joked with us long enough. They are not committed, they don't have the numbers and they are now sabotaging the coalition,” a close Raila ally, who requested anonymity, protested.

The Star has established that Raila has convened the ODM National Executive Committee meeting on Friday next week that will be followed the day after by a bigger convention of the National Governing Council.

The NGC comprises all the party’s 98 elected MPs, governors and county chairmen. At the crux of the two meetings is the replacement of at least 11 former officials, including former Secretary-General Ababu Namwamba, who dramatically quit in the run-up to the 2017 polls. A vocal NASA official is highly tipped to succeed the former Budalang’i MP as the party spokesman.

Also to be discussed is the increasingly strenuous relationship between the affiliate parties, amid fears that the coalition is headed for an acrimonious split over unreasonable demands on its senior partner.

Without expounding on the agenda, the ODM Chairman and National Assembly Minority leader John Mbadi confirmed that the two meetings were in the offing.

“Yes, we have an NEC on February 22 and NGC the next day,” Mbadi told the Star in a text message yesterday.

Sources said ODM is scouting for an ingenious political mobiliser, especially for the critical Secretary-General slot, to re-awaken the party's grassroots networks.

ODM was Kenya's biggest political party for 10 years but lost the status after the Jubilee merger of 11 affiliate parties into one political machine on September 10 2016.

There has been a discreet but vigorous push for Raila to scout for new political allies, especially after his co-principals chickened out of his January 30 “inauguration” as the “People’s President”.

His “Deputy President” candidate, Kalonzo Musyoka, has been blowing hot and cold, vowing to also take the “oath” but placing unclear demands in the way. His party has also been embroiled in a bitter fight for a slot on the crucial Parliamentary Service Commission.

ODM will also be seeking to fill the vacancies of two out of three vice-chairmanships vacated by Eldas MP Adan Keynan and former Funyula MP Paul Otuoma to join Turkana Governor Josphat Nanok.

Cracks widened in NASA after Kalonzo, Musalia and Wetang’ula skipped Raila's swearing-in on January 30 after weeks of charging the supporters.

Their absence triggered a backlash, with Kalonzo being branded a traitor by some ardent coalition supporters. But Raila remained cordial and defensive of his co-principals against the reprisals.

What broke the proverbial camel’s back was the decision by Wiper to unilaterally write to Parliament last week, staking a claim to a slot in the Parliamentary Service Commission.

“The only communication we expect from Wiper is when Kalonzo Musyoka will be sworn in. Not those underhand games,” Uriri MP Mark Nyamita protested.

Nominated MP Godfrey Osotsi was even more blunt: “Wiper should state categorically if it walked out of NASA without our knowledge. We also urge the Speaker not to act on any letter, but instead refer the matter to the relevant structures of NASA,” he said.

ODM is by far the superior member of the coalition, with 98 MPs in both the Senate and the National Assembly, followed by Wiper (26), ANC (17) and Ford Kenya (13).

The Orange party is now threatening to use its parliamentary strength to reclaim its rightful share and push out the affiliates from lucrative positions they hold in Parliament, courtesy of the NASA agreement.

The sword is being directed at Ford Kenya’s Wetang’ula, who is the Minority leader in the Senate and Kiminini MP Chris Wamalwa (deputy Minority Whip, National Assembly).